There is a Full-On Open White Supremacist in U.S. Congress and His Quotes are Lit AF! 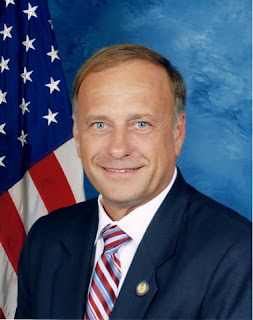 Well, to be fair there's probably a LOT more than one, but Steve King of Iowa's 4th Congressional District is really loud and proud about it; emboldened, I suppose, by the age of #MAGA, heh heh heh! Here's what he said in a tweet today (which I editorialized, natch) about Geert Wilders, the Netherlands' flamboyant, bottle-blonde answer to Donald Trump: 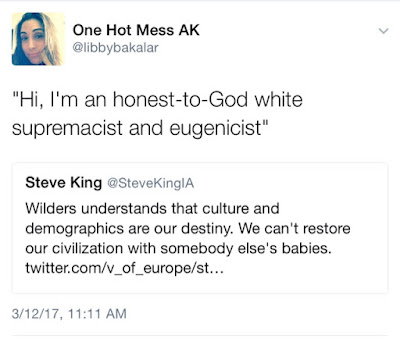 Somebody else's babies, you guys. Restore our civilization, you guys. Who are the "somebody elses?" Well, presumably everyone who's not a blonde, blue eyed, specimen of pure-bred Christian Aryan eugenics like Steve King (side bar: why are all these white supremacists named Steve? Steve Miller, Steve Bannon, Steve King?). So, um, like a LOT of the country. And what exactly are we "restoring?" Oh, yeah. Open white supremacy that's been forced into the shadows for like, seven decades too long?

In case you're curious, this comment is entirely consistent with all of Rep. King's other Nazi-lite bullshit, which I guess he's spent more time cultivating than he has legislating, since he was, after all, voted the "least effective member of Congress."

Here are a few more of Steve King's bon mots and deeds, per his own Wikipedia page:
So really, today's tweet wasn't exactly inconsistent with his general view on these sorts of things. Steve King: a true statesman for 2017.
Posted by One Hot Mess at 6:47 PM