In the Greek myth of Scylla and Charybdis, two deadly hazards loomed before sailors navigating the Strait of Messina between Sicily and Calabria.

On the Calabrian side towered Scylla, a rocky shoal mythologized as a six-headed monster. On the Sicilian side churned Charybdis, a broiling whirlpool said to swallow unfortunate boats whole and drag them to the bottom of the Mediterranean Sea.

According to Homer, Odysseus was advised to pass closer to Scylla and sacrifice a few sailors, rather than tempt the yawning maw of Charybdis with his entire ship.

This myth was a childhood favorite of mine: I had a book with beautiful illustrations that depicted an old wooden boat being tossed about on white-capped seas, in a narrow passageway between a black-tentacled monster and a huge, frothy whirlpool.

I thought of this myth tonight as I watched Dr. Anne Zink sail what I believe was a similar strait during her press briefing, which she has been giving with her bosses, Governor Dunleavy and State Health and Social Services Commissioner Adam Crum, nearly every day since the beginning of the COVID-19 pandemic.

During these conferences, Dr. Zink has been holding a master class in crisis management, thereby earning well-deserved praise for her leadership.

She is calm. She is empathic. She is deeply knowledgeable. She is a numbers person. She studies data as well as health care infrastructure and the availability of personal protective equipment (PPE) in a state with limited quantities of both. She is an assiduous student of this disease. She gives meaning to her direction. She bases her recommendations on science and data. She takes seriously her Hippocratic Oath that all physicians swear to "do no harm." She works tirelessly night and day to mitigate and contain the impact of this disease on the public. She sounds--and probably is--ten times smarter than anyone in the room.

Yet she faced legitimate criticism--and questions--from both reporters and legislators yesterday as to why one particular procedure was singled out in the latest State Department of Health COVID guidance.
Naturally, that procedure was abortion. As Rasha McChesney at KTOO reported:


Alaska joined at least five other states in banning elective abortions during the coronavirus outbreak. That procedure, along with dozens of others, is listed as an elective surgery — state officials suspended those in mid-March. But on Tuesday, Dunleavy issued clarification about exactly which surgeries to stop. Health and Social Services Commissioner Adam Crum said the state followed guidance from the American College of Surgeons about which procedures should be delayed. However, the guidance the state refers to doesn’t recommend delaying pregnancy terminations at all — either for medical reasons or if a patient requests it. According to the guidance, pregnancy termination is a procedure that “if significantly delayed, could cause significant harm.”

Here's another report on this, describing how certain states--Ohio, Texas, Oklahoma, Alabama, and Louisiana--have chosen to specifically call out abortion as a procedure that should be avoided if possible during the COVID pandemic in order to conserve PPE. Both Dunleavy and Zink tonight dodged questions from reporters as to WHY the state guidance--otherwise verbatim to the federal guidance--differed in this conspicuous regard.

The answer is politics, notwithstanding Dunleavy's forceful denials to the contrary.

His disgraced former Chief of Staff, Tuckerman Babcock, posted on his public Facebook page last month that closing Planned Parenthood for two weeks would save more lives than the virus would ever take.
This administration vindictively and unconstitutionally vetoed $350,000 from the court system for interpreting Alaskans' reproductive rights in a way that did not sit well with Dunleavy and his base.
And just months ago, before the pandemic, the governor fired and replaced the entire abortion-issue-plagued State Medical Board.

Some anti-choice folks are asking why abortions should get "special treatment" when every other clinic is being "asked to sacrifice" PPE, but that is not the question.
No one is arguing against universal preservation of PPE or asking some providers to sacrifice PPE while others won’t have to do the same. What reporters, legislators, and the public want to know is WHY Alaska has joined a minority of (not coincidentally, very red) states in issuing guidance specific to abortion that is at odds with its national counterpart.

There is no answer to this question, or at least none that can be said aloud.

For over a decade, I worked for and defended five administrations of Republican governors. My goal was always to uphold my oath to support and defend the constitution of the United States and the State of Alaska. Before being unconstitutionally fired (along with two doctors and two other lawyers) for speaking out against the misdeeds of the Trump administration and other illegal and unconstitutional activity, none of these prior governors had ever put me in a position of having to sign my name to something I thought violated my professional oath.

I expect Dr. Zink is in a similar position. She just doesn't have time to fight with her bosses about this. She's simply counting on doctors—including abortion providers—to do what's best for their patients in adhering to their own oaths.
Her focus, as she has said, is to save as many lives in Alaska as possible by emphasizing social distancing and conserving as many resources as we can. I imagine that her calculus is to pick her battles: to focus on understanding the disease every day, increase the supply chain of PPE, and flatten the curve of the virus, rather than try to convince her bosses to quit throwing red meat at their base.

I agree with the Governor that Dr. Zink is a treasure and asset to the state, and that she is performing beautifully and unflappably under unspeakable pressure. That her boss has put her in the awkward position of having to defend his political peccadilloes in the midst of a global pandemic says a lot about him and nothing about her.

Understand that mediocre hacks like Dunleavy don't run for office because they care about the public health and welfare. They run on blind ambition and to redistribute wealth to their corporate and religious backers. They simply do not view their duty to the public the way people like Dr. Zink do.

So when Governor Dunleavy claims he isn't playing politics with a pandemic, you can bet he is lying, and that Dr. Zink is doing everything in her power to ignore him and save lives.
In other words, she is choosing the Scylla of her superiors' petty political side-projects over the Charybdis of a disease scientists do not yet fully understand, and that left unchecked, will surely bring what the doctor has described as a "significant loss of life."

Alaska needs her, and she is making the right choice. 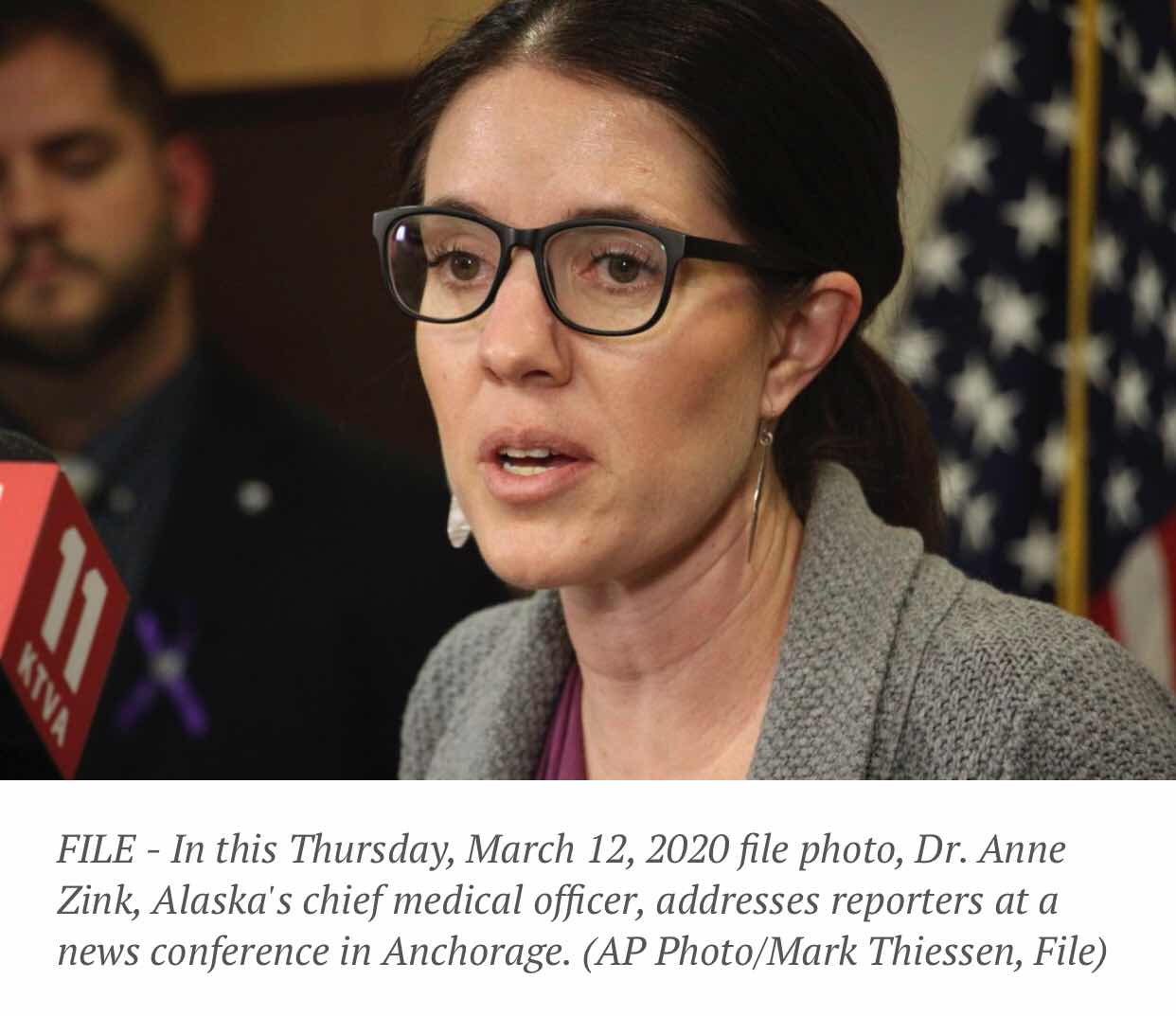