There have been at least seven events in 2021 in which Alaskan antisemitism has been on display:

1. Anchorage Assemblywoman Jamie Allard defending Nazi-themed license-plates in January.
2. Failed mayoral candidate Heather Herndon complaining about the “Jew Lawyers” like “Jew Dunbar” who control Anchorage.
3. The unearthing of a 2013 Hitler-praising paean by Anchorage Mayor Dave Bronson.
4. Governor Mike Dunleavy’s early-September comparison of public-health mandates as something out of “someplace in Europe in 1939”
5. Rep. Sara Hannan’s bizarre claim that Nazi torture-experiments involving hypothermia “produced results”
6. Rep. David Eastman’s posting a link to a Holocaust-denial website in mid-September; and
7. The aforementioned Mayor Bronson’s defense of the wearing of Stars of David by white people throwing tantrums about masks and/or vaccines[1]

One Hot Mess and other "tart bloggers" often identify what’s happening as “Whiteness” on full display. But what does that mean? If Jews are white—and it sure looks like we are, at least here in the United States-- how can antisemitism be an expression of Whiteness?
Well, it's complicated, so buckle up.
Growing up in an upper-middle-class milieu in Indianapolis, Indiana, in the 1980s and ’90s, I never thought of myself as anything other than a white kid, although I was always aware of a Jewish identity. My parents were non-practicing atheists, in fact—and therefore so was I. We celebrated Hannukah, mostly as an excuse to spoil me with a present a night; but we also celebrated Christmas, and never went to synagogue.
Below is my kindergarten school picture. I was a blue-eyed Jew. I was born at Methodist Hospital, played softball in the Tabernacle Presbyterian church league, went to summer camp at the Flat Rock River YMCA camp, and attended St. Richard’s Episcopal School from kindergarten through 8th grade. Being Jewish was different--not as different as the handful of Black kids there; not as different as my Hispanic-American classmate; a little more different than my Hungarian-American classmate—but just a different kind of white kid--although my mother, accurately enough, liked to point out that my skin color was actually “pinky-beige.”
And yet.
There was a country club in Indianapolis, to which a number of my schoolmates’ families belonged, that did not allow Jews.[1] Golf, tennis and swimming—and I should add here that having the social and financial wherewithal to even think about joining a country club was itself an obvious privilege denied to most citizens of Indianapolis—have exactly nothing to do with religious beliefs, and indeed it should not come as a surprise that Riviera didn’t allow Black members, either. Of course, this was true not just at this one club, but vast numbers of country clubs, affluent suburbs, fraternities, and sororities across the country, North and South, East and West.
This wasn’t about religious practice, it was about racial identity; while Judaism is a matter of faith, Jewishness is a matter of race. So while Jews, while not non-white in the sense that Black Americans are non-white, have never quite been completely white.
So what are we?
We could start with genetics. Genetic studies show that Ashkenazi Jews (who comprise about 90-95% of American Jews today) have a distinct genetic profile, most famously manifesting itself in a number of genetic disorders to which we are prone. That profile is much more closely related to other Semitic peoples of the Middle East—i.e., to Arabs—than it is to Europeans, which is what you’d expect for a group of people who lived in the Middle East for many thousands of years before migrating into what is now Europe in the 900s AD, and largely frowned on intermarriage.

The Lebanese-American community, largely Christian and present in America since the 1870s, is mostly seen as white—at least, it was until 2001. Ralph Nader and Casey Kasem are famous members of this heritage). First-generation Muslim immigrants from Egypt are not usually seen as white.

If all these “largely” and “usually” and “until 2001” caveats seem weird for what looks like a yes-or-no question, it’s because whiteness or the lack thereof is NOT a yes-or-no question, and it doesn’t really have much to do with genetics: racial categories existed long before anyone knew what DNA or even a gene was. Race is a social category, not a biological one, and so the answer to the question “who is white?” has varied from time to time and from place to place.
White people are whoever most people decide are white people.

In the antebellum south, for example, Jews were clearly white: they could (and did) own slaves and vote; the Confederate Secretary of the Treasury was Jewish. In the Jim Crow era, Southern Jews drank at the whites-only water fountains and went to whites-only schools. In America, Jews were occasionally formally (and more often informally) denied access to various things that entirely white people had (like country club memberships), but they could usually gain that access by assimilation: converting to Christianity or at least avoiding the outward trappings of Jewishness. Barry Goldwater, whose father was Jewish but who was raised in the Episcopal faith of his mother, achieved full whiteness via this path. It might have sometimes caused a small scandal and resulted in playground harassment if someone was discovered to have had a Jewish grandparent, but it rarely resulted in legalized discrimination.

In Europe during the World War II era, on the other hand, Jews were very clearly not white.
The Nazis' insanely baroque racial hierarchy system elevated Aryans as the whitest of white, but other Europeans were still white, except for Slavs, unless they were Slavs who enthusiastically embraced Nazism (like I said: baroque). But Jews were very definitely considered a different race, and were viewed—like Ruma and Sinti people, the only other ethnic groups targeted for outright extermination by the Nazis--as outsiders sojourning in Europe rather than Europeans.
Converting wouldn’t help; to Nazis, being Jewish was a matter of blood. The 1933 Nuremberg Code, the first legal encoding of Nazi antisemitism (based at least partly on the Jim Crow segregation laws of the American South) stripped anyone more than half-Jewish of their citizenship. In practice, most Jewish Germans who had an “Aryan” spouse or parent survived the Third Reich because they had citizens who could advocate on their behalf; those who were fully Jewish and tried to rely on their neighbors instead of their family for protection mostly met a bad end. And the vast majority of Jews killed in the Holocaust were Polish and Soviet citizens who never had a chance at all.
For reasons that remain unclear to me, in the decades after Nazism was ground into powder by the Eighth Air Force and Soviet soldiers riding American trucks, the losers’ ideology crossed the Atlantic and grafted itself to the American racial system, which revolved (then and now) around the central axis of whiteness and blackness. Modern American white supremacy/Neo-Nazism is deeply weird and idiosyncratic, and the particulars can vary from loser to loser.
Some, like Rep. David Eastman, appear to think that the Holocaust is a hoax foisted upon a gullible world (by the Jews, obviously); others think it happened and was great; others yet, unlike the historical Nazis, can square support for a Jewish state in the Middle East with their antisemitism.
But the basic idea goes something like this: Jews are members of a highly distinctive and white-hating race. Unable to compete with Whitey on the level playing field of a racially homogenous or racially stratified society, the wily Jew manipulates society, controlling the levers of banking and media to promote racial heterogeneity. This, to the white supremacist, is why Jews are the secret power behind the thing that most threatens Whiteness: interracial marriage.

It needs to be pointed out very clearly that when Jews like me and One Hot Mess talk about Whiteness, with a capital W, we don’t simply mean people who belong to the racial category referred to as "white."  Whiteness means actively anchoring your White racial identity to the center of your political and cultural identity; it means believing that providing complete political, social, and economic equality to non-White people is a threat to the White way of life. It means recognizing that the future of America is multi-racial, and instead of celebrating this fact, feeling yourself under siege from the encroaching advance of demographics.
Distilled essence of Whiteness can be seen here, in this clip from a town hall in Anchorage’s locus of Whiteness, Eagle River, in February of 2021: In response to a complaint about people not wearing masks, a puffed-up and enraged White man demands to know if he is “also too white for you?” These people feel that their racial identity is constantly under assault with,—of course and as usual—surreptitious Jews pulling the strings.
It is hard to logically square this with these same white folk cosplaying Jewish victims of the Holocaust, because this shit is dumb as fuck and not logical at all. But as I learned in Iraq, just because something is dumb as fuck and illogical, doesn’t mean it’s not really happening, and this is really happening.
The same people wearing and/or defending Stars of David as victimhood cosplay are, literally, the same individuals who defended the Nazi-themed license plates at the beginning of this year: therefore, we know they are not being worn “in solidarity with Jews.” Indeed, comparing routine public health measures to the Holocaust is itself a form of Holocaust denial, because it trivializes and minimizes the actual suffering of actual Jews. If the whitest fear is to be treated the way that Whitey treated Black people, then the greatest antisemitic fear is to be treated the way that antisemites treat Jews. Wearing yellow-star badges is a projection of that fear.

The political power of those who center their own Whiteness has seen a shocking surge in the last decade or so: one of them even became President. Among the least charming developments of my adulthood has been the realization that some appreciable fraction of my neighbors (about 16%, according to this poll)—including at least one state legislator--would throw me in a gas chamber, while some much larger fraction would stand by and do nothing while it happened.
So although my physical appearance renders me functionally white and I reap the daily benefits of white privilege—I can jog through a wealthy neighborhood without having the cops called on me; I can go to a convenience store late at night without fear of getting shot by cops, and so forth—I, and everyone in this country who identifies themselves loudly as Jews—will never be white enough for Whitey.
I am excluded from their definition of Whiteness and therefore categorically reject it. I have to stand in solidarity with all the people whom Whiteness threatens and persecutes. Therefore, although I can’t speak for any other member of the tribe, this blue-eyed Jew is not white.

[2] Some Internet sleuthing has revealed that Riviera was opened to Jews in 1981, a year before I was born, as the result of a lawsuit. I nevertheless have vivid childhood memories of my parents telling me that “Rivvy” did not allow Jews at that time. 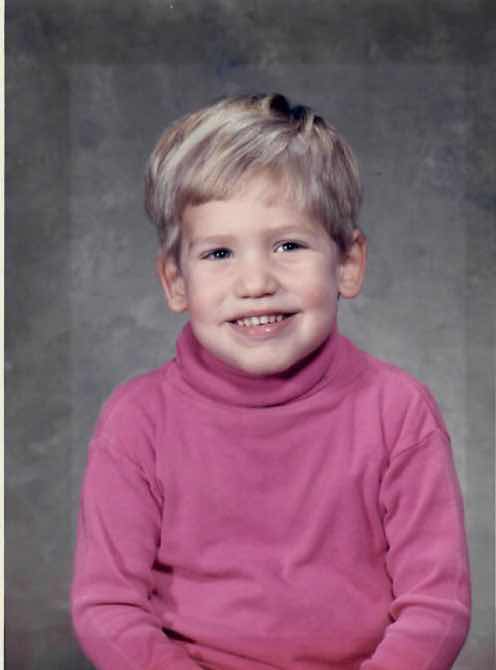 Ivan Hodes, known leftist, has lived and worked in Anchorage for 16 years. He has a degree in European history from the United States Military Academy and is a veteran of Operation Iraqi Freedom. The views expressed are his alone and do not necessarily represent the views of the Department of Defense or its components.
Posted by One Hot Mess at 10:28 AM No comments: