You guys. It was suuuuuuch an embarrassing week for SCROTUS. Like, OMG. Seriously it was so embarrassing. First, a unanimous Supreme Court overturned a Gorsuch decision IN THE MIDDLE OF HIS CONFIRMATION HEARING. Can you imagine?!?!? This is like a "Say Anything" column in YM Magazine from the late 80s:

I was sitting in front of the Senate Judiciary Committee, right in the middle of my confirmation hearing for a seat on the United States Supreme Court, when all of a sudden I found out that all 8 justices overruled one of my decisions eight to zero! It was SO totally embarrassing, I just got up and ran right to the bathroom. 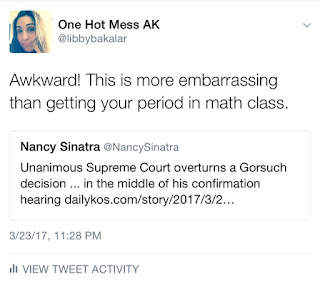 Then there was our Dear Leader SCROTUS pretending to drive a truck. I am literally not shitting you when I say that there's an event put on by Juneau Parks & Rec every year where the City brings out the firetruck and the ambulance and the buses and kids climb in them and get to have their picture taken in the driver's seat. I have one of these pics of Isaac in a helicopter from when he was three. FOR REAL. 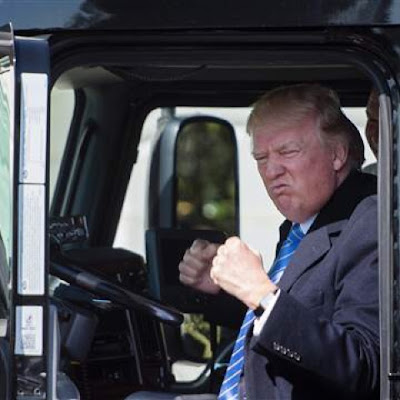 Then there was this. Ads congratulating Congresspeople for repealing the ACA before they actually did that. I get how this is necessary when two baseball teams go to the World Series, and you have to make up a bunch of shirts even for the losing team, just in case they win. But we're talking about thousands of articles of clothing. These ads take like five seconds to put together and distribute AND you should have a waaaay better idea ahead of time whether you're going to win or not. You'd think you could at least wait until you'd CLOSED THE YOOOGE TERRIFIC DEAL before releasing these stupid ads. 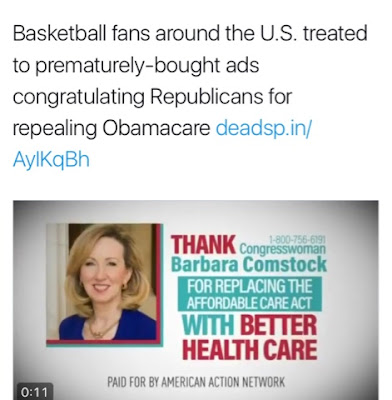 Finally, it wouldn't be O.H.M. if I didn't end on my own embarrassment. I totally tweeted my love letter to Ed Sheeran and my offer to have an affair with him and guess what? He DID NOT TWEET BACK to me and his 17 million followers that I'm the most hilarious woman he's ever met and he would totally be my boyfriend if another ginger guitar player hadn't gotten to me first.