A Dudebro I Once Tried and Failed to Bang Became a Priest, Because of Course He Did

I'm not ashamed to admit that romantic rejection was high on my list of special skills from puberty onward. I tended to pursue fruitless dalliances with dudebros who were ambivalent about me at best, and wholly rejecting at worst, to the exclusion of many booger-eaters and the occasional gem enticed by my well-honed feminine wiles.

I recently learned that one of the aforementioned dudebros whose bones I tried to jump out of boredom (and who was definitively having less than none of me) grew up to be a priest, because of course he did.

I feel like this is a metaphor for my many failings in love.

Let's be clear: I haven't seen or spoken to this guy in 20 years. In fact, I think the last time I saw him was in 1998 when I tried and failed to make out with him; and even then I barely knew the fellow. He was from the Deep South and I was/am from the Bronx, so I suspect he was not accustomed to a somewhat forward Jewish Jezebel. But he had a beard and long hair and was into the outdoors, and thus proved irresistible to me at the time. (Even then, he looked like Jesus).

I don't presume to conclude that I am the sole reason he took a vow of celibacy and committed his life to God, but I can't discount the possibility. For all I know, it was that moment on a lawn in New Hampshire when I moved in for a kiss and he recoiled in horror that led this man to say to himself, "you know what, this is horrible, and I never want to deal with any of this awkwardness ever again. I think I shall become a priest!"

Yes, I realize this is giving myself a highly narcissistic level of credit for the impact I've had on the life of a relative stranger. But it's often the briefest moments that unexpectedly lead us to our most consequential life choices, isn't it?
Any priest can tell you that.

I'd need the records to be sure, but I am low-key convinced this guy's admissions essay to seminary contained the following question: "when did you know you wanted to become a priest?," and the answer was: "when some girl from New York City tried to stick her tongue in my mouth." 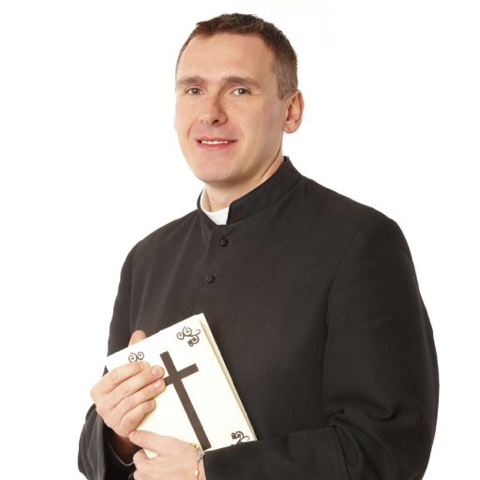 Stock photo of rando priest: not actual dudebro in question.
Posted by One Hot Mess at 6:37 PM