Every 40 years or so, each generation forces the generation before it to suffer through the former's euphoric nostalgia trips of the popular culture of their youths.

When I was a kid, it was 50s doo-wop and the Doors. Now it's Madonna, Pearl Jam, the Beastie Boys, and retro Star Wars toys. That's why I'm doing my generational duty and announcing my campaign to Revive Five Alive, or #RFA.

World War II might have brought us the Greatest Generation, but WE have Cookie Crisp Cereal, the Smurfs, and Five Alive.

Five Alive was a "citrus beverage" that fell off the U.S. map sometime circa 1987. It was a staple of every 70s and 80s kitchen, right next to the Tab and the "I Can't Believe It's Not Butter," the taste of which, by the way, made the fact that it wasn't butter highly credible.

In retrospect, "I Can't Believe It's Not Butter" was the dawn of the post-truth, post-fact, fake news era. Everyone could easily believe it wasn't butter, and yet they insisted we couldn't, and everyone pretended we couldn't. It was a mass gaslighting by the partially hydrogenated soybean oil lobby, and now it's too late. We now have the "I Can't Believe It's Not Butter" President.

But back to Five Alive.

This shit was tasty! It was like a cross between lemonade, Sunny D, and Fresca. It was blatantly melted-down candy, and the only thing better and more highly prized was grape Kool-Aid and red Hawaiian Punch. Somehow my parents drew the line at Hawaiian Punch and Kool-Aid, but let me drink Five Alive and Juicy Juice, which makes no sense.

Anyway, as long as we are #MAGA to a golden era when no one was forced to pretend not to be racists, ableists, and misogynists, let's bring back the fruit-flavored drinks while we're at it. 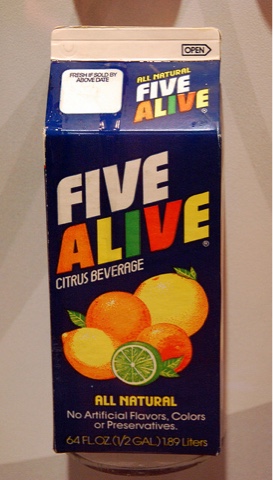 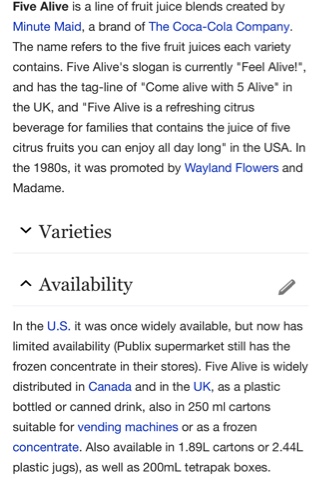