Everyone called him Chuck, but if you really knew him, you called him Charlie. So that’s what I called him, and it made me feel cool. Like I was elevating myself to a special level of intimacy simply with one little tweak to a nickname for Charles.

It didn’t hurt that he looked like a pinup from Tiger Beat magazine, either--a teen heartthrob before he was even a teenager. Somehow he skipped over the whole "awkward phase," the asshole. I should know. I was there.

Girls loved him, all the more so because as beautiful as he was--and he was not unaware of that fact--he was never a dick. He was never cruel or unkind, like many boys his age; and if he could sometimes be suggestible, he was never mean. He never mocked anyone. He was always funny and witty, and a little dark and broody as well.

Every girl knew Charlie had perfect teeth, but not every girl knew he was funny and dark. I loved that about him, and I loved how I felt like I was the only girl who knew it.

We met at summer camp in 1988, before I had boobs and when Charlie’s entire wardrobe consisted of unwashed New York Yankees tee-shirts. We both lived in New York City, so we saw each other often throughout the year.

Charlie possessed an enviable collection of Nintendo games and VHS movies; and he had free reign over Manhattan’s ample takeout menu options. We played Legend of Zelda and ordered big greasy hamburgers from Jackson Hole, laughing like morons when the guy answered the phone the same way every time, “HALLO JACKSON!,” in a heavy accent of indeterminate origin, with the bustle of industrial kitchen noise in the background.

He was a regular fixture at my apartment too. Sometimes he’d take the express bus and bring his homework. We’d compare French text books, making fun of the pictures and the characters: “Guillaume va a la discotheque!” What the fuck is a “discotheque” and who goes to one anymore? And we would dissolve into peals of laughter at how stupid they were, these cartoon French kids in a text book, drinking nonalcoholic punch and dancing at a party to vinyl records.

When Charlie left for boarding school in tenth grade, I didn’t have a word for the void I felt, but I knew it was a little glowing orb of love. We talked on the phone when he was homesick, which was often. I would check the mail each week for a mix tape full of Led Zeppelin and Doors music, pop it into the tape deck on the pink carpet of my bedroom floor, and then carefully select songs for my reciprocal mix tape, writing the song titles in careful print on the liner sheet of a blank cassette.

I insisted on tagging along with Charlie's mom on the two hour drive to all of his plays (I think I still have the playbills somewhere). When he came home for vacations, I decamped to his mom’s place, and I’d borrow his clothes with no intention of returning them. We’d sometimes mess around a little, completely at my insistence and mostly out of a mutual curiosity I think.

Charlie always had a girlfriend, but we never talked about why none of them was me until we were maybe 20 or 21.

We were looking at a familiar lake and mountains, sitting on the front porch of the mess hall at the same summer camp where we’d met a decade earlier, and where we were both working as counselors. By this time, each of us had experienced at least one serious relationship. I can’t remember exactly how the conversation went, but I more or less asked Charlie why he had never wanted to be my boyfriend. I presented him with a sort of half-hearted, now-or-never ultimatum that seems so silly and juvenile in retrospect.

His response, though, was neither of those things. I’m not getting the words right, but it was something along the lines of didn’t I realize our friendship was better and more enduring than any romantic relationship could ever be. He was letting me down easy, I knew. But he wasn’t lying either. I knew that, too. And, surprised at how unhurt I felt in that moment, I also knew he was absolutely right.

In the twenty years since, he’s been proven right more times than I can count. Last week, Charlie was on a TV show (he’s an actor) and I trolled him hard by texting his lines to him in real time in dramatic all-caps.

“This is amazing,” he texted back. “I’m standing in my kitchen and I can’t stop laughing.”

Yesterday my dad mailed me an old photo of Charlie and me that my dad “restored,” meaning he got a new photo printer and wanted to test it out. I stared at the photo and let my mind unspool for awhile before texting Charlie and asking his permission to write a blog post about our friendship.

“Um, sure!,” he wrote back. “I want you to be able to express your beautiful self, Goody Bak!”

He was invoking one of a million inside jokes—this one a rather cerebral reference to my last name and Arthur Miller’s play, The Crucible—where every female character in 1692 Salem, Massachusetts was called “Goody” so-and-so.

This morning, while Paige was getting ready for school, I had this thought:  Every girl deserves a boy who, after three decades of friendship, affectionately implies she was a witness in the Salem witch trials. 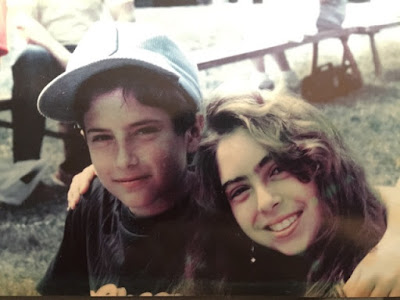 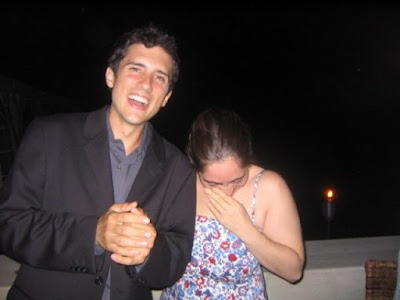 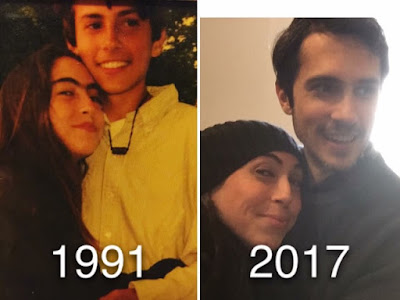 Email ThisBlogThis!Share to TwitterShare to FacebookShare to Pinterest
Labels: Friendship