Now I Need to Worry About Deformed Sperm? Fucking Grrreeeeaaaat.

As if I don't have enough to worry about between white supremacist cyber-stalkers coming for me in real life and that weird mole on my back, now the New York Times' Nicholas Kristof says I need to concern myself with deformed sperm?!

Not my husband's, mind you. IDGAF about those guys. As far as I'm concerned, Geoff can shoot blanks until his dick falls off. The very last thing I need (besides a life-time supply of Nutella) is another mini-human gnawing on my titties for a year, robbing me of precious sleep (not to mention booze), and generally making me want to swallow a bottle of Xanax . . .  except when it smiles and I play with its toes and smell its new-baby head smell because then  . . . okay now I want another baby. Okay, never mind, I'm over it.

Anyway, the real concern here is 6 year-old Isaac, who according to this op-ed will one day fire off two-headed, two-tailed, misshapen "pathetic swimmers, veering like drunks or paddling crazily in circles" due to endocrine-disrupting chemicals found in plastic, sunscreen, and paper receipts.

According to Mr. Kristof, this is an urgent issue that "affects reproduction, possibly even our species' future," and we should basically start a Save the Humans campaign like we did for whales and bald eagles.

He quotes an epidemiologist who avoids plastic and eating anything that touched it at all costs (SO EASY TO DO, AMIRITE?!) and proposes aggressive regulation of jizz-poison. He ends with the ominous warning that "our human future will only be as healthy as our sperm."

Now, I don't mean to be a Debbie Downer, and I'm all for curtailing endocrine-disrupting chemicals because what they do to our bodies and planet is clearly sketchy AF.

But it seems to me that actually, letting the human race extinguish itself by shitting up its own baby batter just so we can drink Budweiser from plastic Solo cups and plump up our eyelashes with volumizing mascara is exactly what we deserve as a species.

Not to mention, Isaac is now way less likely to get a girl pregnant! I might actually have to microwave one of his Lego trucks and have him rest his balls in the hatchback just to keep me from becoming a grandma before 50.

At a certain point, we actually don't deserve to survive the evolutionary process of natural selection, and endocrine disrupting chemicals are only one of a zillion reasons why.

Some others, in no particular order, are as follows:

1. The band One Direction
2. Direct market Ponzi schemes that try to make you buy candles, vitamins, candles that smell like vitamins, and vitamins that taste like candles.
3. Reply all email
4. Stunting for the 'gram
5. The work refrigerator
6. Hold music
7. Yeast infections
8. Mansplaining
9. Whitesplaining
10. Cheeto Hitler

So, I mean, deformed sperm are actually a GOOD thing, when you think about it.

If people were clever/self-destructive enough to jack their own semen to a level of dysfunction where every other teaspoon of human splooge on planet earth contains 90% two-headed sperm that can't do their ONE JOB, then guess what? Maybe we DESERVE to go extinct. The rest of the planet will thank us. 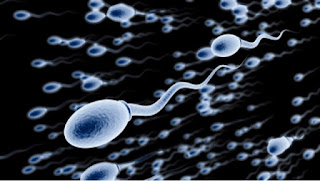