Happy Halloween, O.H.M. fans! It's the first sunny Halloween in Juneau that I can remember in ten years, so I consider this a good omen for all.

Awhile back, I reported on the carnival enthusiasm gap, that unique phenomenon in which kids and adults experience vastly divergent levels of enthusiasm for a traveling carnival.

Family "Fun" Night is a monthly fundraiser/chaos-fest organized by the Juneau School District. For $10, you can drop off your child (2nd grade and up) or accompany your child (below 2nd grade) to an elementary school common area while they get their faces painted, do a cake walk, draw pictures, play dodge ball, and generally scream and run around for two hours.

The "fun" part of Family Fun Night is not officially in quotes. But I like to put it in quotes, because again, Family "Fun" Night provides a HIGHLY qualified level of fun. As in, it's fun for kids. Adults . . . not so much.

Last night was Game 3 of the World Series featuring our hometown Mets, so I gave Geoff a well-deserved hall pass and jumped on the grenade of Family "Fun" Night. By far, the hardest part was the fact that I was required to attend Family "Fun" Night sober, because I was driving my own children AND someone else's child there, and was supposed to responsibly monitor all three of them for two hours.

The moment I arrived, I regretted not having moved in across the street from the school: The only thing that can edit the quotes out of Family "Fun" Night is alcohol, and a lot of it at that.

The halls were bedecked in festive Halloween decorations, and the kids were likewise trial-running their costumes. All of the adults, including the parent volunteers, looked like shell-shocked zombies, and not because that was their costume.

I immediately lost track of my charges and told myself it was OK because this was a confined space with well-monitored exits. Which was true, but still didn't entirely alleviate the sensory assault that was 300 children hopped up on sugar, running around in said confined space at top speed.

I exchanged knowing glances with another parent. I can't be sure, but I think we silently communicated that we were both in the middle of a Family Fun Night enthusiasm gap, and simply grateful that it wasn't taking place in our living rooms. 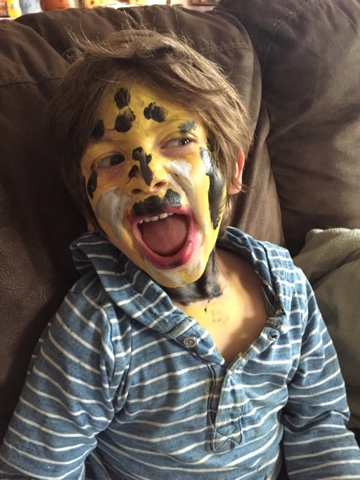