Our history with pets in this household is dubious at best. (Recall: the short, eventful life of Shimmer the fish; the Valentine's Day demise of Feathers (also a fish); and treating the local Petco as a zoo). But Isaac's fifth birthday tomorrow presented an opportunity for redemption.

And so it was that a potentially ill-fated trip to "Tad Tubetown" (doubles version) began. Tubetown isn't a bong shop in Berkeley. It's a mail-order tadpole habitat service, which believe it or not, is actually a thing.

You can see from the photo below that Isaac greeted the arrival of "Squiggles" the tadpole with enthusiasm. What he didn't know--and what I remain reluctant to tell him--is that Squiggles' sibling (the "double" in "Double Tubetown") didn't survive the trip to Alaska from whence he came.

When the habitat showed up on our doorstep, I opened the box and shook Squiggles' buddy around in its plastic baggie like that little brat in braces does in Finding Nemo in her uncle's dentist office. But he was tits up, and there was no getting around it: Squiggles' unnamed companion went to the great lily pond in the sky somewhere between the Portland Fed-Ex service center and Juneau.

Then there was the water.
As you can also see from the instructions, it was "VERY IMPORTANT!!" that the inhabitants of Double Tubetown swim around in bottled SPRING water. Well, I went to the convenience store down the street and spent $17 on six bottles of Desani only to discover that Desani was filtered DRINKING water, not spring water.
Then I had to go to a totally different store (after returning all the Desani), and choose between DISTILLED, DRINKING, SPRING, and some other types of water. I only ever drink tap water, so I was rather shocked at the sheer variety of "water" that exists in the supermarket.

Two jugs of SPRING water in hand, I finally came back with the right kind of water and we set up Double Tubetown with careful adherence to the directions.
Squiggles survived his first night chez One Hot Mess, but as of this writing, he looks a little listless and had to be prompted to motion with a sharp rap of knuckles on plexiglass.
I won't lie: the trip to Double Tube Town is looking ill-fated to say the least ... 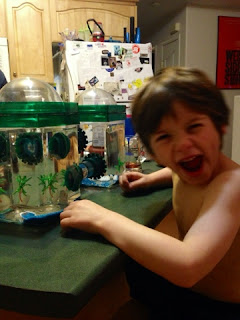 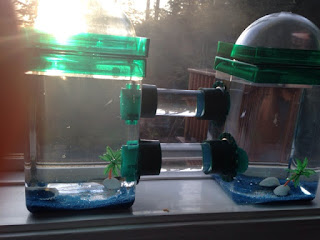 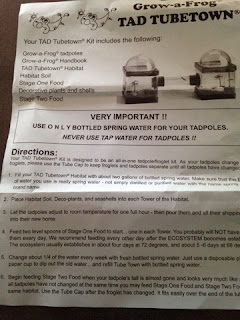