This Surgery Will Fix Your Camel Toe!

Aficionados of O.H.M. will recall prior posts about plastic surgery to turn your brown eyes blue and make your vagina white. Today, thanks once again to an alert reader, I am forced to revisit the amazing and ever-hilarious topic of increasingly extreme and ridiculous plastic surgeries.


In a compelling advertorial/advertarticle for plastic surgeons on New York City's Upper East Side, The New York Post--NYC's shittiest and most popular tabloid--reports that "women are getting labiaplasty to look good in their yoga pants": 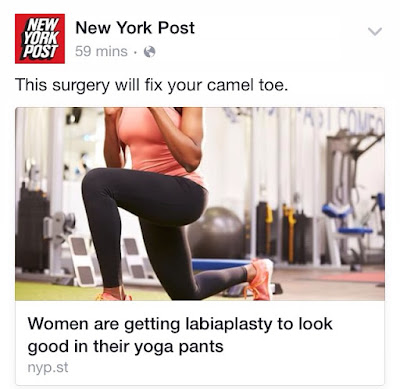 I don't believe in plastic surgery, unless it's a free tummy tuck and a boob job with zero recovery time and no chance that I will die under the knife and forever be posthumously criticized as stupid and vain. Then I'm all ears. I'm also all ears now, or all lips, as the case may be.

My love of yoga pants is well-trodden territory, but I've been less vocal about my camel toe anxieties. If it weren't for my giant vajayjay, I'd be sure to wear yoga pants more often, which is why I need to go carve a few slices off my roast beef for $5-7 large.

Except I can't really afford this procedure, because my kids want skating lessons and shit. So I'm hoping they let me pay in that oft-used '90's currency, Camel Cash, from the back of Camel cigarettes. As I recall, in addition to duffel bags and T-shirts, labiaplasty to repair camel toe was one of the items Phillip Morris allowed you to redeem with this: According to the Post, one patient told the surgeon featured in the article, Dr. Richard Swift, to "make [her] look like Barbie!" Another physician who is adhering firmly to the Hippocratic Oath of "do no harm" which doctors literally learn on day one of medical school, pointed out that "more women are pursuing labiaplasty to correct labia-related issues that are interfering with their ability to perform sexually, to perform daily tasks such as exercise, or are merely causing discomfort."

Because nothing will help your "ability to perform sexually," "perform daily tasks," or alleviate "discomfort" like lying down on a table under alien autopsy lights and letting a man hack away at your nether parts in order to make you "look sleeker in so-called 'athleisure wear,' made from Lycra-like fabrics which often compress the area."

We wouldn't want our "areas" unduly "compressed," and we definitely want Dr. Edwards to carefully slice our excess gyro meat hunks off our crotch pork-tornados so he can get that new Audi convertible he's been eyeing with $0 down and 0% APR financing.

Dr. Swift added that "one of my patients was particularly self-conscious doing Pilates in a leotard--so much so that she was afraid to do certain moves." AFRAID to do certain PILATES moves? I'm not a doctor, but if you're afraid to do certain Pilates moves, and this fear is sufficiently problematic that you are voluntarily paying someone to mutilate your snatch, I'm guessing you probably need a psychiatrist--not a plastic surgeon.