What Are These Bull Moose Really Fighting Over?

In this video recently taken by a father and son in a residential subdivision in Anchorage, two sizable bull moose in rut can be seen duking it out with their giant horns.

Big game biologists would posit that this argument is over the annual right to mate. But I'm here to tell you that these ungulates--who count among their mating rituals "splashing themselves with urine" and "deep vocalizations"--are fighting about more than just the choicest cows.

As humans encroach further and further onto moose habitat, moose behavior has followed suit. Field observations have led this keen observer to determine ten things apart from mating that this bull moose fight is likely really about:

1. A provision in their Homeowners Association bylaws says homeowners aren't supposed to eat the weeds out of each other's yards, and one of them has recently done just that.

2. One of the bulls had borrowed the other's chain saw, broke the chain, and didn't even have the decency to refill it with gas.

3. Whether Donald Trump is really a viable candidate for president, and whether Hillary is electable.

4. Whose flank would make the most delicious spaghetti and moose balls.

5. Whose antlers would look the most formidable above the front door of a hunter's cabin in Fairbanks.

7. The wisdom and necessity of the Anchorage LGBT anti-discrimination ordinance.

8. The fact that one's "deep vocalizations" are keeping the other one up at night and preventing him from splashing himself with urine in peace.

9. Whether Bullwinkle the cartoon moose or Thidwick the Big Hearted Moose is the better representative for their species in popular culture. 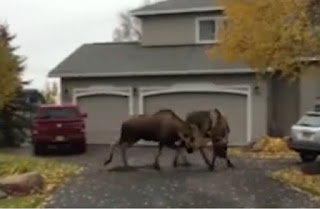