It's Actually Amazing How Bad I Still Am at Fishing 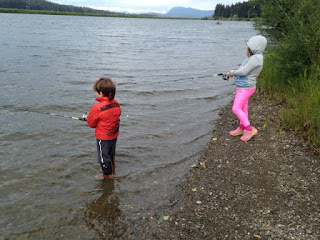 You would think a decade of living in Alaska would have taught me a thing or two, but you'd be dead wrong.

Like a foreigner who stubbornly refuses to learn the language, I've spent the better part of ten years in denial about mastering something as basic as how to cast a fishing rod. I'm seriously almost not even sure that the words "cast a fishing rod" actually belong together in a sentence in that order.

That's why "Family Fishing Day" at a local park put the fear of God in me. Only one person in our family knows how to fish with anything approaching proficiency, and that person was helping someone move this morning. So it fell to me on this occasion to make memories, and making memories is not my strong suit.

See, I didn't grow up chasing crawdads down at old Pappy Van Winkle's creek or whatever it is kids do in Norman Rockwell's Real America. In NYC, the closest I ever got to fishing was running after the Good Humor ice cream truck and handing the old man driver guy a dollar bill for the blue and green shark pop (and sometimes the Super Mario Brothers head with a pink bubble gum ball for Mario's nose).

Without sounding too doom-and-gloom, I tried to warn my kids that our fishing expedition was destined for failure by managing their expectations. "Mommy is really bad at fishing you guys," I said gravely. "We're probably not going to catch anything." (I was comforted by the knowledge that even people who know how to fish also often don't catch anything).

My kids were not dissuaded. Not in the slightest.

We got to the Alaska Department of Fish & Game tent, where volunteers were distributing fishing rods and little cups of tiny shrimp for bait. I reluctantly gathered the requisite supplies and headed to a corner of beach I'd staked out.

My first concern (as usual) was myself. Specifically, I was afraid of looking stupid. So I tried to place our little trio strategically: close enough to where I could observe presumably more competent parents, and far enough away to avoid being caught doing just that.

"Where's the hook?" is a question that silently entered my mind. Oh there it is. The skills I had acquired during the handful of times I'd used a fishing rod were really being brought to bear now.

I managed to get both kids' hooks baited and the damn things in the water. They only became hopelessly tangled on one out of every three casts, and no one lost an eye. Granted, we caught precisely zero fish, were standing three inches from shore, and my hands smelled like shrimp cocktail you might get on an airplane. But we were perfectly happy doing all of this for the better part of an hour.

Afterwards, we took advantage of Family Fishing Day's free snacks. Because if it's one lesson I want to teach my kids, it's to always grab free food where you can get it, whether you're hungry or not. We ate our goldfish crackers with pretzel stick fishing rod and peanut butter bait, and then migrated to the nearby playground.

I was sitting on the bench when a stranger approached me. "I'm a big fan of your blog," she said. "I started reading it through Conor." Ah, CDATPOS. The gift that keeps on giving! We introduced ourselves and I found her later on Facebook. "Thanks for reading the blog," I wrote. "Thank you for reminding me that just because I don't spring out of bed at 5:00 a.m. singing 'I Feel Pretty' and itching to make a four-course breakfast doesn't mean I'm a crappy parent!"

Oh there are so, SO many of those reminders that I can and will continue to provide. And my decade-in-the-making fishing fail is only the most recent. 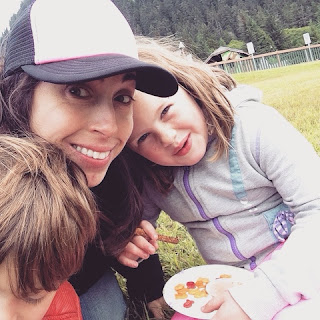