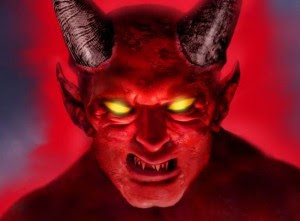 This is Satan, and Play Doh is his favorite toy.

Play Doh--a colorful, allegedly non-toxic modeling compound made from flour, water, salt, boric acid, and mineral oil--was forged in the fiery blazes of Hell by none other than the Fallen Angel and Ruler of All Demons Himself.

I know this to be true.

For only Beelzebub could have created the infernal "Play Doh" as the #1 go-to rainy day activity for children ages 3 and up.

Only this Mortal Enemy of God and Humanity could have spelled "Dough" as "Doh," knowing full well that Americans are too lazy even for a silent "ough" (see also, "Donut").

Knowing too, that the word "DOH!" doubles as the exclamation a parent utters when irreversibly grinding Play Doh into the carpet late at night with his or her bare foot.

It is the diabolical Overlord of the Underworld who inhabits the bodies and minds of my children when they beg for the "Play Doh Fun Factory," a $45 atrocity consisting of plastic ice cream cones, presses, molds, and other phthalate-laden garbage originating in the deepest provinces of rural China and including six small tubs of brightly-colored demon-putty, but of course not batteries.

Only Lucifer would call Play-Doh "fun." Because while it is expensive and disgusting, it is anything but fun.

Sadly, Mephistopheles rejected "Play Doh Expensive and Disgusting Factory" as an alternate name, choosing instead to corrupt the minds and hearts of innocent children, lead them into temptation, and make them believe in their bedeviled, blackened souls that this pernicious sludge is "fun."

Only this False Prophet, Master of the Occult, and Angel of Darkness Himself could be responsible for such malevolence. This. What my first-born boy-child pressed through a Star of David-shaped plastic mold and pronounced to be "poop."

Out of the mouths of babes (even those possessed by the Anti-Christ) comes the most profound wisdom, for the boy-child was right.

Expensive, bright, salty-tasting, wheat-flour-based poop. Poop that conspicuously warns fretful parents in large black print that Hades' Most Treasured Plaything CONTAINS WHEAT. As it would, for no grain is more evil than WHEAT.

The nefarious, glutenous poop whose varied, brilliant colors quickly combine to form a uniform fecal brown, never again to be returned to their original state.

The monstrous abomination that dries and crumbles and unleashes chaos on par with that of glitter, pinatas, and face paint--the original Unholy Trinity of Toys.

You can also make your own Play Doh at home with very few ingredients, using this simple recipe:

Combine all ingredients in a wrought-iron cauldron and cook on a brimstone at 1,000,000 degrees Fahrenheit while speaking in tongues. Genuflect before the cauldron and pledge your allegiance to The Prince of Darkness, He Who Knows True Evil, the One and Only Satan. Summon His Being with your hands raised above the boiling pot and Slayer's "Reign In Blood" playing loudly in the background. Substitute any album by Nine Inch Nails if Slayer is unavailable. Allow to cool for fifteen minutes. Add food coloring and enjoy!

In sum, God help the parent who finds his or her household cast beneath the dark, evil spell of Play Doh on a rainy day. For only God's Light and/or your child's eventual and inevitable boredom can save you from the sticky, crumbly grasp of Satan's modeling compound. 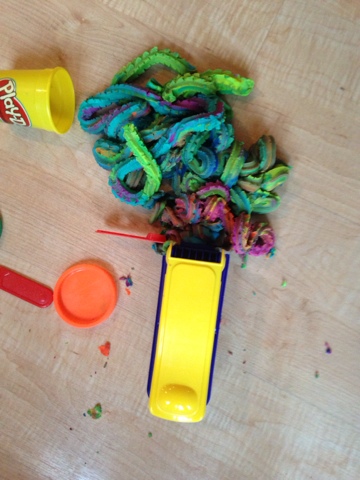