You Guuuys, This Little Old Lady Just Wants Everyone to Do the Nazi Salute RIGHT, M'Kay?

This would be amazing, if it weren't so scary and sad.

A Trump supporter named Birgitt Peterson, 69, made sure that everyone at a Trump rally in Chicago knew how to salute Hitler. See, she was born in Nazi Germany and resented the comparisons between Trump and Hitler. I'm still not sure if that's because she thought Hitler was a bad guy or a pretty cool dude, 'cause here's what she said:


“They said Trump is a second Hitler,” Ms. Peterson said. “I said do you know what that sign stands for? Do you know who Hitler really was?” “I make the point that they are demonstrating something they had no knowledge about,” she said. “If you want to do it right, you do it right. You don’t know what you are doing."

M'kay. That tooooootes clears things up.

Let's give Birgitt the benefit of the doubt and assume she was offended at Trump being compared to Hitler, because Hitler was incomparably bad. As a Jewish person with relatives who survived and died in the Holocaust, that's an affront I can appreciate. But given that she was at a Trump rally, to support a self-avowed far right bigot wearing his name in bold letters on a T-shirt, I find that explanation specious at best.

Here's a quick one-question pop quiz for Birgitt--who I am pretty sure is a perfectly nice old lady--for the next time she goes to a Trump rally and accidentally ends up on social media doing the Heil Hitler:

Pop Quiz: What do you do when you see people doing the Nazi salute incorrectly?

(a) Correct them in front of a camera in a photo that explodes the Internet.
(b) Offer the world the worst explanation ever for what you just did.
(c) Ignore them.
(d) Just head on home and do something about that perm.
(e) Both (c) and (d).


I am SMDH so hard right now, my head is about to fall off my body. 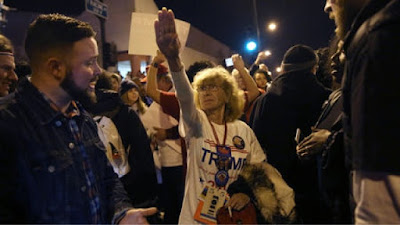