I Did Not Come to Play With You Hos. I Came to Slay! (And by Slay, I Mean Watch Blue Crush on Cable)

I defy you to turn on cable at 9:00 p.m. right at the beginning of Blue Crush (2002) and NOT watch this movie from start to finish.

If you haven't seen Blue Crush, I feel sorry for you, because it's so bad, it's good. In a way, watching Blue Crush is the movie-watching equivalent of sniffing dry erase markers or standing in a garage huffing gasoline. It's easiest to explain the plot of this film in diagram form (Fig.1), but basically it's an amalgam of Endless Summer, Cinderella, and a promotional video for a timeshare on Maui.

A girl-next-door/sun-kissed blonde surfer girl-type from the wrong side of the tracks/island is living with her two slightly-less-attractive best friends and much-less-attractive tween kid sister in Hawaii (their mother bailed to Vegas), trying to make ends meet.

In minutes one through five of the movie, we learn through a series of flashbacks that Blondie was a big deal up-and-coming surfer, until she smacked her head on a rock and almost drowned at a contest a few years back. Blondie and her squad are now toiling as maids in a fancy resort hotel, where they dream of Blondie's Big Comeback in the next big wave surf contest.

The trio meets a pro football team who's staying at the hotel after Blondie yells at them on the beach for leaving puke and dead condoms in their rooms. The head maid at the hotel cans Blondie for this stunt, which sucks because she desperately needs a Jay Oh Bee and the cash that comes with it.

FORTUNATELY, the Tom Brady of the football team (both in looks and position) offers to hire Blondie and her friends to give him and his teammates surf lessons--a form of highly dangerous recreation for which they inexplicably have time and permission, despite being official property of the NFL.

I don't need to tell you what happens next, but fuck it, I will anyway.

Tom Brady and Blondie strike up a PG-romance that is largely documented in montage format (DUH). This initiates class and relationship-based tension amidst Squad Blondie, riling the local Native Hawaiian surfer dudes who have claimed the best surf spots for their own, and threatening to derail Blondie's surfing career. (DUH, DUH, and DUH).

But wait! This girl next door is tougher than she looks. (DUH). She's not gonna let a boy define her, even if he is a super hot NFL quarterback! (DUH and DUH again). With the help of her friends and a few football-based-analogy pep talks from Tom Brady, Blondie crushes it at "pipe" (the big surf contest), thereby overcoming her fear of big wave surfing triggered by the prior near-drowning.

One of her pro-surf idols--a K.D. Lang doppelganger who, because she's clearly over 30 and a lesbian, does not threaten Blondie's hegemony as the epicenter of the male gaze in this movie--helps Blondie catch the wave that carries her to redemption and puts her on the cover of a surfer magazine, sans pants.

The movie ends with Blondie and Tom Brady playing tonsil hockey on the beach, as their respective squads and the somehow-now-friendly-and-supportive Native Hawaiian locals cheer them on in the background.

Most of the appeal of this film is visual. It's 108 minutes of eye candy: Big wave surfing, gorgeous panoramas of Hawaii, and an indescribably hot Kate Bosworth in a zillion different outfits from bikinis and board shorts to bathrobes and ballgowns.

Oh whatever, she's not so hot, you're saying. I call bullshit on that. If you're a girl, Blondie is everything American society programs you to aspire to, and if you're a boy, she is everything society tells you to covet and that you deserve: white, blonde, petite, blue-eyed, self-confident and tough, yet a little bit of a damsel in distress, with a bangin' bikini body and a megawatt smile you can bring home to mom.

In other words, Blondie is supposed to make you 8th-grade jealous, and it works. Natch, the no-name actor who plays her quarterback love interest is the male yin to Blondie's Tommy Hilfiger female yang. The script, plot, and characters in Blue Crush are generic, one-dimensional, and elevate the dominant paradigm of gender, sexuality, race, and popular culture in every conceivable way.

And of course, it's because of all this that you simply cannot stop watching this total shit-show of a movie from beginning to end. 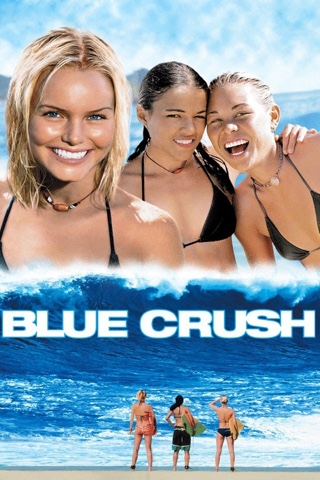 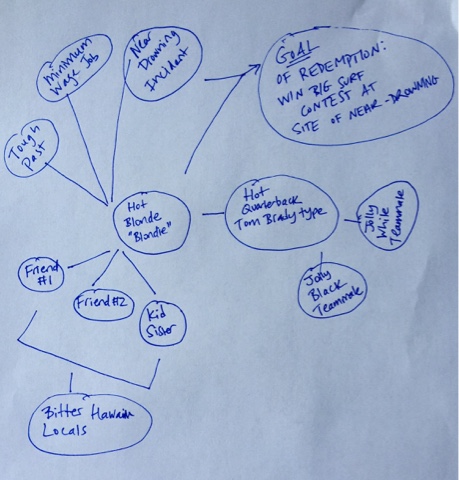