The very fact that I have Dawn dish washing liquid in my house should tell you that the needle on my greenie meter skews relatively low. I'm not proud of it, but it's true: I often let laziness interfere with doing 100% right by Mother Earth. Because also not pictured here are the innumerable rolls of paper towels and the disposable diapers (Seventh Generation, people, Seventh Generation) that we have used in the past decade.

Even with the best environmental intentions--and mine are mediocre at best--if you produced a human being in the industrialized world, your carbon footprint is instantly enormous. So I'm the last person to get on a soap box (badum-dum-chh) about dish detergent.

But I do love me some rich irony and a presumption of my stupidity. Especially when that irony is marketed to me and the rest of the world on a sketchy household product made by Proctor & Gamble, the ginormous multinational consumer goods company besieged by scandals including price fixing, toxic shock syndrome, and controversial animal testing programs.

But it's okay, because everyone knows that when an environmentally catastrophic oil spill happens like the Exxon Valdez or the Deepwater Horizon, scientists, veterinarians, and volunteers turn to DAWN to scrub all that nasty crude oil off the little birdies' feathers and the cuddly otters' fur.

There's a near universal consensus that nothing works quite like Dawn, which proudly brags that it donates tons of its soap every time a sweet, twenty-something Greenpeace volunteer from Seattle with her hair in braids shows up to wipe the gasoline off a pelican's beak.

And this is when you just have to stop and appreciate the ballsy irony of Dawn's campaign to bill itself as the solution to a problem that it indisputably helped create. It took me precisely three clicks to confirm what I suspected was the source of this irony:

What the company doesn't advertise — and these days is reluctant to admit — is that the grease-cutting part of the potion is made from petroleum.
"To make the best product out there, you have to have some in there," says Ian Tholking of Procter & Gamble. He says less than one-seventh of Dawn comes from petroleum. "To say Dawn's horrible because of this, that doesn't make a whole lot of sense," he says, "and that's what we're trying to avoid. Because we're not trying to do something evil here." "I think it's extremely ironic," says Martin Wolf, a chemist for Seventh Generation, which makes a dish liquid without petroleum. "Here we are trying to squeeze every last drop of oil we can out of the Earth, and it's despoiling the Earth. And we're using that same product that's messing up the Earth to clean it up."

Looks like Dr. Martin Wolf, PhD beat me to the punchline of this joke. It's a circle of life to rival Disney's The Lion King: drill for crude oil that Dawn puts into a detergent that is then donated to clean up the animals covered in the crude oil that spills on the animals on its way to market . . . for Dawn to put back into its soap.

Whether you're a tree hugging hippie or a lobbyist for BP, I think everyone with any critical thinking skills can appreciate this as some straight-up LOLZ. It's like the equivalent of Philip Morris sponsoring a lung cancer wing at Sloan Kettering, which whoops, haha, has basically already happened.

But back to that cute little baby duckie on the bottle. Look how cute he is! Look how Dawn cleans his fluffy feathers! That's all you need to know. 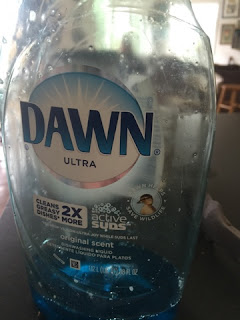