And it happened that both of them came to a place
Where their budget bills stood
Without budging a trace.

"Look here, now!" the Right-Going Zax said, "I say!
You are blocking my bills! I need yeas, and you're nay!"
I'm a Right-Going Zax and I always go right.
Get out of my way, now, let's finish this fight!"

"Who's in whose way?" snapped the Left-Going Zax.
"I always go left, making left-going tracks.
So you're in MY way! And I ask you to move
And let me go left in my left-going groove."

Then the Right-Going Zax puffed his chest up with pride.
"I never," he said, "take a step to one side.
And I'll prove to you that I won't change my ways
If I have to stay in this capital ten zillion days!"

"And I'll prove to YOU," yelled the Left-Going Zax,
"That I can stand here in my fine dry-cleaned slacks
For ten zillion years! For I live by a rule
That I learned as a youth back in law-making School.
Never budge! That's my rule. Never budge in the least!
Not an inch to the west! Not an inch to the east!
I'll stay here, not budging! I can and I will
If it makes you and me and the whole state stand still!"

Well...
Of course the state didn't stand still. The state rolled its eyes.
In a couple of years, some new Zax arrived.
And they did the same thing as those two stubborn Zax
By resuming their fights about pipelines and tax. 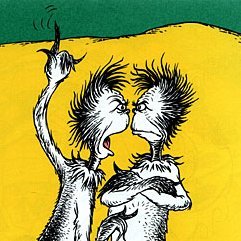