I found that out the hard way, as my aunt reminded me at Thanksgiving this year.

"Now THAT would make a good blog post!" she announced, reminiscing about the time we went on a family vacation to North Carolina's Outer Banks one August many years ago.

My mom, aunt, cousin, dad, and cousin's girlfriend all looked up at once from our adult coloring books; the ones that my psychiatrist mother had informally prescribed to my entire family as a more structured take on the traditional activity of sitting around the living room, and that had commanded our undivided attention for the better part of three days.

"Oh My GOD. The crabs!" I shrieked. For we all remembered it well. Too well.

We had rented a beach house in Duck, North Carolina for the week. Determined to make the most of our time there, we set down our bags the moment we arrived, donned our bathing suits, and ran out enthusiastically to greet the warm sand and surf.

We played and frolicked for hours, splashing in the water and sitting on the wet sand at the edge of the ocean, letting the waves break over our sun-starved legs.

It wasn't until later, in the shower, when we peeled ourselves out of our bathing suits, that we discovered the crabs.

No, what emerged from the handful of sand that had accumulated in the crotches of our bathing suits looked like something that would horrify even the proprietor of a brothel in Hanoi or the Red Light District of Amsterdam.

They looked kind of like this, but less cute and equally prehistoric: 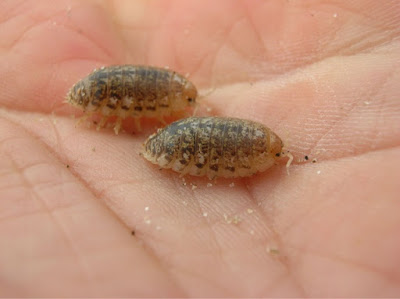 "WHAT THE FUCK IS THAT?!" we all yelled from several bathrooms throughout the house (or some version of the same sentiment).

It appeared that while we had been obliviously sitting in the sand, the pleasant waves had flushed a small community of sand crabs into the crotches of our bathing suits, and the ill-fated invertebrates were now scurrying around a bathtub, as confused and unhappy as we were.

I don't need to tell you that this was an unpleasant surprise, and it marked the first and last time we sat down in the sand at water's edge in Duck, North Carolina.
Posted by One Hot Mess at 4:43 PM