My first experience with medical-grade anesthesia came in the form of an intravenous dose of I'm-not-sure-exactly-what at an an oral surgeon's office in midtown Manhattan, during my senior year of high school.

I was getting all four of my impacted wisdom teeth removed, and it was love at first sight. Not with the surgeon (whom my mom claimed was "hot" but who to me appeared fucking ANCIENT at likely-no-more-than-50). No, I fell in love with IV-opiates. I know drugs are no joke. But I'm not joking when I say I love them. At least the ones that go into your arm under closely-monitored medical supervision where there is little to no risk that any harm will come to you.

I recall my mom harmlessly flirting with the surgeon and laughing at me as I drifted off into a lucid reverie of sorts, floating in and out of consciousness and awaking several hours later in a recovery room.

Here's where shit got real though, because I was tearing that crib UP from floor to ceiling. My mom (being a licensed medical professional and all) was familiar with the after-effects of "Twilight anesthesia," and I don't mean passing out from boredom at Kristen Stewart's lackluster performance in Breaking Dawn. I mean, apparently it can make you severely agitated (a.k.a. BEYOND CRAY) as it's leaving your system.

Well I was basically cursing up a blue streak (more than usual I mean) and nearly landed a haymaker right in my mom's face. I was screaming at the top of my lungs for her to GET ME THE FUCK OUT OF HERE! She and the nurses were rather amused.

No one fucks with my mom, so naturally she was amused. After all, this is the woman who, when interrogated by three surgeons during a medical school interview at Cornell and asked whether she "planned to have a family and how she planned to be a doctor with a family," snapped, "I don't know, you tell me. How do YOU do it?"

She didn't get into Cornell. She was literally told point blank that the school had met its quota of TEN women in a 100+ person class!

As you can see from the photo below, she also had zero compunction about dressing me like a boy. So predictably, she handled the anesthesia-induced quasi-assault like a BOSS. 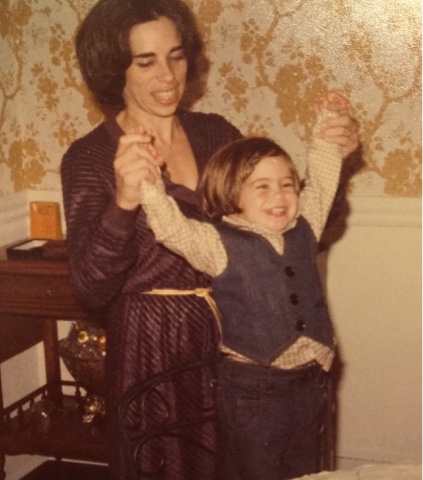