Very Seriously, You Will Not Believe That This Isn't From the Onion

The title of the November 18 article is "Starwood Devotees Greet Marriott Merger with Dread and Anger." Basically, a bunch of rich peeps who spend six months out of every year in fancy hotels (and per the comments on the article, want you to pity them for that) have a serious case of the SADS because Starwood Hotels & Resorts, their favorite luxury hotel conglomerate, is marrying the hotel equivalent of a meth whore.


They are "reacting emotionally." With "DREAD." And "ANGER." Over a HOTEL MERGER.

And you better believe, the wide swath of desperate humanity whose lives are presently being devastated by this unholy corporate union had WORDS for the atrocity. "I'm livid," said one man quoted in the article. He continued: "I dread to think what the merger will do to my platinum-for-life status."

No, you cannot make this shit up. But wait. There's more. Ever so much more.

See, in case you didn't know, every "big hotel chain has a loyalty program." But this one "stands out for the way it pampers its most frequent customers." Pretty much the only thing Starwood Preferred Guests doesn't do is put its elite customers in actual pampers so that they don't have to suffer the indignity and inconvenience of shitting in a toilet all by themselves.

Under the now-endangered loyalty program, frequent guests "are assigned a personal travel ambassador to handle their bookings, cajole hotel managers for upgrades, and arrange customized perks." One such guest noted that he sends his "ambassador a Christmas gift and know[s] about her family, and she knows about [his] wife."

Mmmmm'kaaaaaaay. Would love to hear more background on that sub-plot.

Another imperiled victim of the merger told the reporter wistfully that he "happens to like chocolate-raspberry mousse, and most Starwood hotels know to greet him with that dessert upon check-in."

But "it's not all about the frills." No sir. These mini-Kanye Wests are "worried." Specifically, they are worried "that service will deteriorate as Starwood gets folded into the much larger Marriott network." In other words, the high-end hotels under the Starwood umbrella--like the W and the St. Regis--will now just be like any other old shitty Motel 6 off Interstate-80 in the middle of cow-patty Nebraska. And this, you see, is profoundly worrisome.

A Chicago-based consultant/victim interviewed for the article "comforted himself" by "noting that Marriott at least owns Ritz-Carlton, 'which [he] guess[es] is good,' although [he] contends many Ritz-Carltons are 'resort factories' lacking the distinctive touches of Starwood's top properties." (Incidentally, when I picture this guy "comforting himself," I imagine him alternately jacking off, weeping, and rocking back and forth with his knees clutched to his chest on a bear-skin rug).

The consultant/victim went on to bemoan the deficiencies of the Ritz-Carlton in Grand Cayman, the resort equivalent of the Cheesecake Factory, I guess, because "if you don't put your book down on a beach chair at 8 a.m., you're in the fifth row back from the beach."

Fortunately, he has an upcoming trip to Dubai, and is looking forward to a planned stay at a Starwood hotel there because it offers "falconry."

I had to look that up. It's "the hunting of wild quarry in its natural state and habitat by means of a trained bird of prey." So what's the pick-up artist equivalent of falconry, I wonder? MILF-ery? What Starwood hotel offers that service? Surely there must be at least one. Perhaps in Monaco.

Another guest was devastated that his "ambassador" had gone dark soon after the merger. He found himself in a weird "I don't know what's going on phase." I can only assume it was very disorienting-- basically like the top 1% equivalent of being in a refugee tent camp sponsored by UNESCO.

There's a sliver of hope though:  Starwood devotees are seeking safe harbor in the Hyatt loyalty program, which they "guess is sort of the next best thing."

May God have mercy on their souls, and may He help them find the one and only thing in life they seem to be deeply lacking: 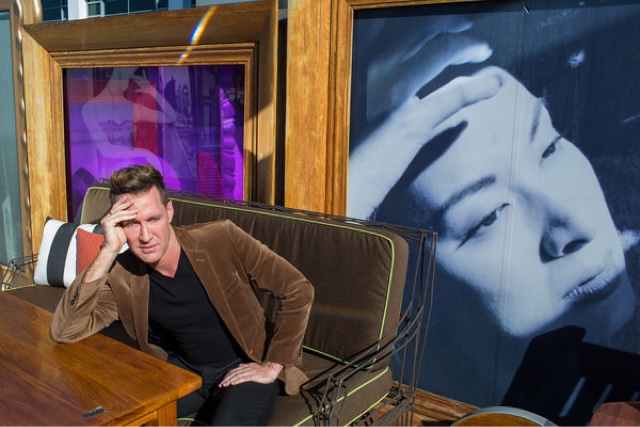 One of the victims of the tragic merger, un-ironically (?) doing his best imitation of the photograph behind him. Courtesy NYT.
Posted by One Hot Mess at 9:56 AM