Dear Random Egg Sculpture That I Had to Have for No Apparent Reason Whatsoever,

I remember when I first saw you, proudly displayed in the window of the (now long defunct) Regal Pharmacy on Johnson Avenue.

You were next to a lot of other polymer food sculptures, but none beckoned to me quite like you did. Your clear yellow plastic yolk and half-shells resembled a model of the female reproductive system from health class, and I knew I had to have you.

There was just one wrinkle: inexplicably, you cost $100.

$100! In 1989! For a random egg sculpture! My mom--usually a complete pushover prone to dropping scratch on total crap at the slightest provocation--drew a firm line in the sand with you. She was determined to test the mettle of my commitment by challenging me to save up all my babysitting money for six months, confident that I would forget all about you in six hours.

Well, we showed them all, didn't we, Random Egg Sculpture That I Had to Have for No Apparent Reason Whatsoever?

I returned to Regal Pharmacy in six months and triumphantly dropped a Benjamin on you, rightfully earned through several honest nights' "work" watching Full House and Perfect Strangers while the kids did whatever the fuck they wanted babysitting kids in my apartment building, much to the surprise of my mother and the cashier.

Years later, in college, my friends made fun of me because of you. See, you might not know this, but I worked 20 hours a week making omelettes at a shitty on-campus eatery, and the first thing I had to do at the beginning of every shift was crack 200 of your brethren into a giant bucket.

Those who had the privilege of visiting me at my 12-story post-war apartment building--known by the also-very-regal name of "River House"--claimed that you were a trophy, awarded to me for my deft and renowned omelette-flipping skills.

Still later, shortly after I graduated from college and omelette making, I was walking down the street wearing the same bandanna on my head that I always wore (only semi-successfully) to keep long, black hairs out of people's omelettes, and someone cried, "Hey! Omelette Girl!"

And I thought fondly of you.

Oh, Random Egg Sculpture That I Had to Have for No Apparent Reason Whatsoever, it's so very good to see you again. 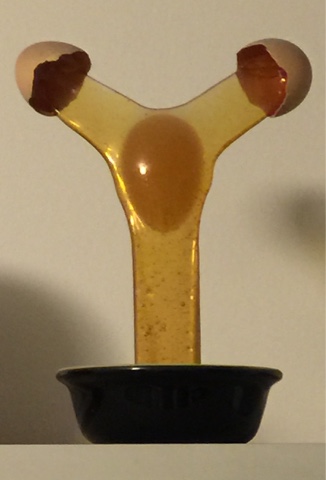