Almost every day of the week after Thanksgiving has now been claimed by a marketing gimmick of some kind, created by shadowy commercial forces that no one can seem to identify. Their directive to America is clear: trample your fellow humans to grab a flat screen TV at WalMart on Friday; buy a vegetable steamer on Amazon the following Monday; and give a few bucks to charity on Tuesday.

Here's the good news though: Wednesday, Thursday, Saturday, and Sunday are still available!

Since Saturday and Sunday are the Lord's Days of Rest (in the Judeo-Christian tradition at least), and Thursday is sort of the new Friday, I hereby claim the Wednesday after Thanksgiving as Zero Fucks Given Wednesday (ZFGW for short).

Zero Fucks Given Wednesday--intended to honor either (a) complete resignation to our basest human impulses; or, conversely (b) an act of profound conscientious objection--will be represented on social media with the hashtag #ZeroFucksGivenWednesday, and it calls upon the American populace to take and publicize various small gestures implying the giving of zero fucks.

Historically, total badasses like Rosa Parks, Che Guevara, and Aung San Suu Kyi gave zero fucks, but the time for awesome zero-fuck-giving like that is over, and now all we have is Julian Assange, Donald Trump, and Anonymous.

Here are just a few imagined examples of ZFGW Tweets:

How will YOU celebrate Zero Fucks Given Wednesday? 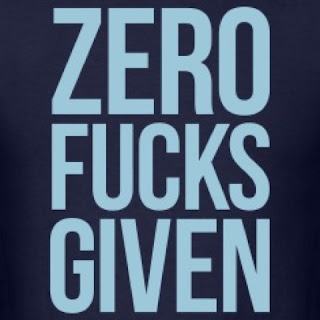