I started out writing this blog post by observing that the Awkward Double Goodbye should have been featured on Seinfeld, and then I read that Larry David called it "one of the worst things you have to do in life."

I wouldn't go quite that far, but it's certainly not one of the best.


The Awkward Double Goodbye occurs after dinner, a movie, or some other social outing, and I'm far from the first person to write about it. But it appeals to my love of all things awkward, so I'm writing about it anyway.

Sometimes it happens with just two people, but more often it involves a small group of friends. It can be platonic or romantic, but it’s more often platonic.

It's that thing where you make a big show of saying goodbye to the people you’ve just spent the past few hours with. Hugs, it-was-great-to-see-yous, when-will-we-hang-out-agains and so on, only to discover that you’re walking in the same direction to get to wherever you’re going next.

Then you have to do the whole goodbye over again, but not before being forced to acknowledge (implicitly or explicitly) that you just spent five minutes in elaborate goodbye-mode for no reason.

Not only that, but you now have to fill the space between the two goodbyes with a topic of conversation whose relative depth or triviality must be carefully calibrated to the distance you are traveling together after the first round of goodbyes, lest you compound the awkwardness with poor inter-goodbye conversational skills.

At the moment you realize your first goodbye has been rendered moot due to a shared post-goodbye travel agenda--thus forcing you into the inevitable second goodbye--you almost want to say to the other people, "go on ahead, we don't have to do this." You also wish you had discussed your departure route beforehand, so you could have organized yourselves into a single, efficient, and not awkward goodbye.

But no one wants to say or do either of those things, because they're awkward. And so the Awkward Double Goodbye is born. 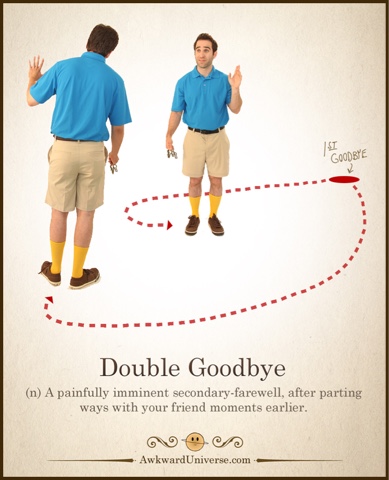