The Interwebs is abuzz with the news that Donald Trump and Vladimir Putin are in a major bromance. O.H.M. now imagines what their G-chat looks like, using real quotes that Vlad and Donald said about each other, rrrrriiiippped from the headlines!  I'll leave it to you, dear readers, to determine which portions of this dialogue are fact and which are fiction. (Hint: only the stuff in blue is fiction).

Donald: I think I'd get along very well with you.
Vlad: You're a bright and talented person, without any doubt.
[Donald is typing . . . ]
Donald: It's always a great honor to be so nicely complimented by a man so highly respected within his own country and beyond.
Vlad: You are the absolute leader of the presidential race.
[Donald is typing . . .]
Donald: I have always felt that Russia and the United States should be able to work well with each other towards defeating terrorism and restoring world peace, not to mention trade and all of the other benefits derived from mutual respect.
[Vlad has entered text . . .]
Vlad: As one of my biographers said, there's a really aggressive posture to both of us. I respect fighters and I respect aggression and I don't respect sort of calm and deliberation. I want a manly adversary. I want somebody I can understand. I see myself as someone who doesn't mince words and who gets into verbal fights as well as knife fights. What I see in you is somebody who's shooting from the hip. Somebody who sees things as being simpler than other politicians or evil journalists might try to make them seem.
[Donald is typing . . .]
Donald: You and I are stablemates. We are very different but I think at the same time I'd get along very well with you. You do not like Obama at all. You don't respect Obama at all. And I'm sure that Obama doesn't like you very much. But I think that I would probably get along with you very well. And I don't think you'd be having the kind of problems that your'e having right now.
Vlad: What else can I do but welcome it? Certainly I welcome it.
[Donald is typing . . .]
Donald: Totally. Russia wants to get rid of ISIS. We want to get rid of ISIS. Maybe let Russia do it. Let them get rid of ISIS. What the hell do we care? People say you've occasionally had to kill a domestic critic or two. Well, to that I say, you're running your country and at least you're a leader. You know, unlike we have in this country. When people call you brilliant it's always good, especially when the person heads up Russia. And I think our country does plenty of killing also.
[Vlad has entered text . . .]
Vlad: I understand that you have a desire to reach another, deeper level of relations with Russia.
Donald: Oh yes, another, deeper level for sure.
Vlad: Speaking of being good stablemates, have you seen the picture of me with no shirt on, on a horse?
Donald: Oh yes, that picture is very famous in my country.
Vlad: Can I send you a signed copy of it . . . wait hang on, let me email it to you now.
Donald: Um . . . This is getting a little awkward my friend!
Vlad: Btw I love your hair. Everyone always makes fun of it and calls you Fuckface VonClownstick. The stick and the fuck part I can see, but the rest of it, not so much.
[Donald is typing . . . ]
Donald. Um . . . .
Vlad: Back to that other, deeper level of relations tho . . . I'm thinking we should meet up at one of your hotels soon. To like, talk strategy?
Donald: Sure you're welcome at any one of my hotels anytime. Preferably one not in bankruptcy.
[Vlad has entered text . . .]
Vlad: But I mean like when you're there tho. Like I'm thinking a couple of Stolis on the rocks, some AC/DC, a little confab about bombing civilians and poisoning adversaries, the lights down low, polar bear skin rug, your orange face lit up even more orange in the glow of the fire's embers . . . like I said. I want a manly adversary. Someone I can understand and who understands me . . .
Donald: Gotta go, been great chatting with you! 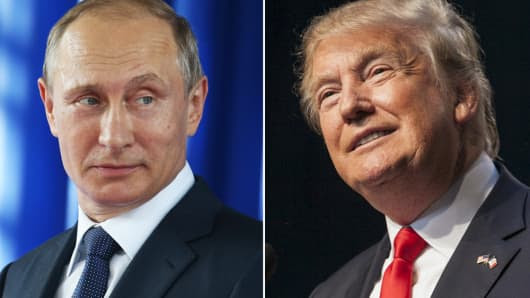