Winter is an endangered species. Everyone knows that, or at least everyone but a few morons in Congress and the people who put them there.

I love everything about winter in Alaska: The snow, especially, but really all of it. Wood stoves, hot showers, big moons, skiing, snow shoeing, the mountains, the northern lights, and the unique and unexpected way Alaska simultaneously tucks into itself and offers itself up to new adventures.

Lately though, winter has become unreliable.

Last year in Southeast Alaska--and in much of the rest of the state as well--winter made a pretty dismal showing. There was a palpable sadness as December turned to January, January to February, and February to March with no real winter to speak of. There was no snow. Animals and plants behaved oddly. Bodies of water that used to freeze for months had only a thin skein of ice on their surface. The Mendenhall Glacier continued its heartbreaking retreat.

Perhaps nowhere are the impacts of climate change more immediately apparent than in this part of the world. With each passing year, no one is sure if winter will come again. "Will we have winter this year?," everyone kept asking each other, looking nervously up at the snowline's progression down the mountain ranges surrounding Juneau.

The answer, at least for now, appears to be yes.

It's an odd analogy, but the way I feel watching the gradual warming of our planet is how I felt watching my grandmother slowly descend into dementia over a period of years: A force that had once been so steady and so dependable for so long was suddenly unpredictable and fundamentally not itself. Sometimes my grandmother would be perfectly lucid, but more and more, you couldn't count on her to remember what year it was, just as you can no longer count on the planet to deliver a season that has defined Alaska and the lives of the people who have lived here for so long.

Today while skiing, I met two women from Texas. Juneau is crawling with tourists in summertime, but I've never met a single winter tourist. This family had no connection to Juneau. They didn't know anyone here. They just wanted to spend Christmas in the snow, get out of the heat, and be outside in the cold, low, sunshine of an Alaskan winter. Briefly, I saw Alaska anew through their eyes.

And it was beautiful. 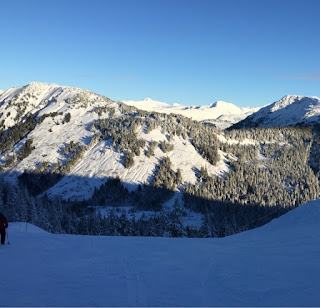