A friend and reader sent me this rather long article from the New Yorker chronicling a not-so-new trend (with its own hashtag, natch) called #vanlife. Vanlife is basically what it sounds like: living in a van. But there’s a lot more to it than that.

Vanlife is a “movement” (RED FLAG). And in order to be a true acolyte of the van life “movement,” you apparently need the following things:

--Long blonde hair (male or female)
--A beard (if male)
--A remodeled VW van
--Six-pack abs and tan lines
--A six-figure job and corporate sponsorships
--Contempt for the rest of the suckers in the world who are chained to their desks like the poor, hideous, pale, fat losers that they are
--An Instagram account with a zillion followers
--WiFi
--Being totes okay with using tons of gas
--A good head for business and a zeal to commodify a “lifestyle”
--Zero shame
--Even less self-awareness

Now let me clarify one thing: it’s not choosing to live in a van when you could afford a house that I’m dragging here (although plenty of people actually HAVE to live in vans and would kill for enough money to rent an apartment without wheels on it).

It’s the conspicuous self-aggrandizement and self-satisfied thirst-trap of curating what you smugly perceive of as your holier-than-thou, heightened value system and “lifestyle movement” on Instagram.

But worse than that, it’s taking a concept that’s supposed to embody the return to a simpler life and a rejection of convention and fucking MARKETING it, which is probably the most simultaneously calculating and conventional thing you could possibly do, a.k.a., a full-throated bear-hug of stone-cold capitalism lurking behind a mask of hippie non-conformity.

At least no one will directly contract giardia from this trend like they might with raw water, although I can't guarantee it, and I can't say the same for sand fleas.

But it begs the question: Why can’t anyone just fucking DO anything anymore without (a) stunting, flexing, and thirsting for the ‘Gram; and/or (b) trying to make money in the process?

Like isn’t it ever enough just to do your own thing without trying to profit from it? Or is the whole world now “pics or it didn’t happen” and “money or it’s not worth it?”

I know what you’re thinking. You’re just jealous. You’re just going off this one article someone sent you. You don’t actually know anyone who lives the #vanlife. You’re not part of this movement. You’re a sad, sorry, fat, alabaster-white slob who uses a flush toilet and has nothing better to do than make fun of other people because again you’re a pathetic, impoverished, un-creative, 9-5 hater with cankles and a Netflix account who can't think outside the box and wishes she had half the online following of the most successful van-lifers who are not serial killers or child molesters.

Here are the best parts of the article, which features a couple who is sponsored by a professional van-lifer COMPANY and are full-time Instagram celebrities. I read the whole thing so you don’t have to, but I’ve pulled the choicest bits. The bible says “judge not, lest ye be judged,” but the truth is ye ARE being judged, so by all means, judge away:

When the waves were choppy, the three congregated in the resort’s hammock zone, where the Wi-Fi signal was strongest.

King, a telegenic former business student, had quit her job at a Sotheby’s branch when she realized that she was unhappy. Smith, a competitive mountain biker and the manager of a kayak store, had never had a traditional office job.

Huntington’s vanlife hashtag was a joking reference to Tupac’s “thug life” tattoo. “You know, it’s not thug life—it’s van life!” he told me. Six years later, more than 1.2 million Instagram posts have been tagged #vanlife. In 2013, Huntington used Kickstarter to fund “Home Is Where You Park It,” a sixty-five-dollar book of his vanlife photographs, which is now in its fourth printing. In October, Black Dog & Leventhal will publish his second book on the topic, “Van Life.”

Editor’s Note: No one wants to Kickstart your lifestyle brand, except lol jk apparently millions of people do. But THIS IS NOT GANGSTER. GET TUPAC’S NAME OUT YOUR MOUF. HE IS ROLLING IN HIS GRAVE! K Thx bye.

“So many people identify with the culture, the attire, the mind-set of surfers, but probably only about ten per cent of them surf,” he said. “That’s what we’re trying to tap into.”

Editor’s Note: Of course you're trying to “tap into” something. Something with a routing number. Open the faucets and MAKE IT RAIN, BITCHEEZZZZ!!!

Attaching a name (and a hashtag) to the phenomenon has also enabled people who would otherwise just be rootless wanderers to make their travels into a kind of product.

Editor’s Note: Of course there has to be a “product.”

Vanlifers have a tendency to call their journeys “projects,” and to describe them in the elevator-pitch terms that make sense to potential sponsors.

Editor’s Note: Every “movement” needs a “journey” and a “project,” and has to sound good in an elevator! P.S. I grew up in a Bronx apartment building and I know what an elevator looks like. Where are the elevators in Big Sur?

The uncertainty of life on the road was a constant low-level drain at first, particularly for King, who discovered that she was afraid of the dark.

Editor’s Note: Does her super hot boyfriend read her Goodnight Van? Or does he just go down on her each night until she feels less afwaid?

GoWesty’s sales have increased fifty-five per cent in the past five years, thanks in part to the vanlife trend. The company now sponsors fifteen vanlife projects, including one run by a couple selling crêpes.

“I don’t think of myself as an employee of GoWesty but more like an ambassador for their vibe,” Smith told me. He began to see that the time King was spending on social media might have a point after all.

Editors’ Note:  Let’s have a euphemism for everything so that it doesn’t sound like exactly what it is: another capitalist scam. That said, "Vibe Ambassador” is going on my resume. Stealing this!

His specialty was a dish he called huevos vancheros: eggs fried in coconut oil, seasoned with turmeric, served over buckwheat with salsa and sauerkraut. The couple bought things to make the van homier and more comfortable: a fruit basket, a travel bidet.

Editor’s Note: VANcheros. CLEVER! Power-wash them assholes on the go!

Editor’s Note: Again with the fucking euphemisms. There has to be one for product placements too . . . "journey-mates," perhaps?

As the afternoon got progressively gloomier, Smith and King transferred their belongings from Boscha to the loaner van: two surfboards (bought at a discount from a sponsor), wetsuits, tins of red lentils and buckwheat, stacks of T-shirts and leggings (mostly from sponsors), a woven blanket (a gift from a sponsor), a hand broom, two yoga mats, three hula hoops in different sizes, a tool kit, a digital S.L.R. camera, and a bag of wheat-free kibble for their soulful, brindled dog, Penny.

Editor’s Note: The three multi-sized hula hoops are a nice touch but the wheat-free kibble really crushes it. Even their DOG is named after money!

Editor’s Note: AH! NOOOOW we get to the bottom of this, so to speak. It all boils down to making bank off a naked woman in a bikini. A woman dudes wanna fuck and girls wanna be. The more things change, the more they stay the same, my friends. So much for breaking the mold.

Advertisers work with people like Smith and King precisely because they’re not famous in the traditional sense. They’re appealing to brands because they have such a strong emotional connection with their followers.

Editor’s Note: Nothing is more easily commodified than people's EMOTIONS!

“We try to leverage the power we have as influencers in the social-media world to bring light to companies that are doing good in the world, that are creating products we believe in,” King explained. “We see every dollar as a vote.” They are sponsored by several companies whose products they use every day, including TruthPaste, which makes clay-based toothpaste, and Four Sigmatic, a “superfood company” that sells instant coffee enhanced with mushroom elixirs.

Editor’s Note: "Influencer" is also going on my resume. Clay-based toothpaste is totes gonna change the world, and so is coffee enhanced with mushroom elixirs. I hope they’re psychoactive because I need to hallucinate the fucking point of this bullshit right now. 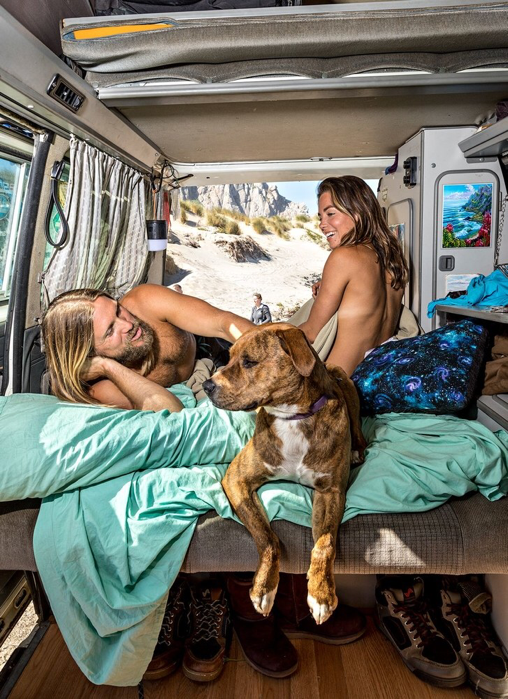 Photo: Jeff Minton, New Yorker
Posted by One Hot Mess at 7:14 AM