Try Not to be a Dick When You Grow Up, M'kay?

I know you're only seven, but time is going fast. I’ve been thinking—and I’m not sure how much control I really have in this department—but maybe don’t grow up to be a dick, m’kay?

We’re in the middle of a bit of a cultural upheaval of sorts where male dickishness is being publicly called into question with new enthusiasm, and as your mother I kind of want you to NOT be a total fucking dick when you grow up, m'kay?

I worry about this, because obviously you’re . . . um . . . gender conforming and into performative masculinity? (see photo evidence below). I’ve given a lot of thought re: how to help you not grow up to be a dick, and read some pretty good articles on the topic, but I think a few concrete examples will help. I want you to come back to this quiz later because unfortunately, you might need it.

1. You’re in high school and have a smart phone with a camera on it. You:

(a) Take a picture of your dick and text it to a girl, demanding that she reciprocate with nudes.

(b) You do (a), and then show her boobs to all of your friends after class.

(d) You use it for landscapes, selifes, and poop memes.

Answer: (d). Sext whoever you want in an adult consensual relationship where there is a mutual bond of affection and trust, but for now don’t do that shit, m’kay? No good will come of it, I promise.

2. You’re hanging out with a group of boys and one of them starts bragging about making out with a “fat drunk slut” at a party last weekend. You:

(a) Laugh and slap that dude a high five and ask when you can have a turn with her.

(b) Ask to read all of the texts between fat drunk slut and the guy who allegedly made out with her.

(c) Say “dude, seriously? That is so not cool,” but laugh as you say it so he knows you’re kidding and won't think you're a loser "feminist."

(d) Say “dude, seriously? That is so not cool. Don’t say that shit. She is a human being and doesn’t deserve that,” and actually mean it.

3. Your male soccer coach says you “run like a girl.” You:

(a) Vow to work on this, because girls are bad at sports.

(b) Take his advice to heart and suppress tears because this is a terrible insult and you’re not allowed to cry.

(d) Thank him profusely, show him an article about Alaskan track star Allie Ostrander, and then openly shed a tear because your coach is a fucking mouth-breather and you feel sorry for him.

Answer: (d): Some of the best runners in the world are girls! And some of the adult men you encounter are stupid AF!

(a) Insist on parking somewhere isolated and making out whether she wants to or not.

(b) See how much of her body you can get your hands on before she starts to squirm, because you need to report back to your friends.

(c) Pretend not to know her the second your friends show up because she’s not the hottest or most popular girl in school and your rep is on the line.

(d) Lean in to kiss her and when she backs away you politely say “hey sorry, no problem,” because you know no means no, and don't say anything about it to anyone because this is an intimate moment and you respect her privacy.

Answer: (d): No means no dude and your reputation is your character, not your conquests. You should know this by now!

5. You’re working on a group project for a class in school, and one of the boys keeps talking over a girl and belittling her good ideas, before stealing them for the final project. You:

(a) Join in because girls don’t have any good ideas.

(b) Tell the guy after class how great his idea was even though you know it wasn’t his.

(c) Do/say nothing, this has nothing to do with you.

(d) Say, “I don’t think she was finished explaining her idea,” and see to it that her name appears front and center on the project so she gets the credit she deserves.

Answer: (d) Boys and men need to speak up when they see guys interrupting girls or taking credit for their good ideas.

6. Your friends call something or someone “gay” as a slur. You:

(b) Laugh because gay is gross.

(d) Roll your eyes because you are secure in your own sexuality and know and love many gay people. You tell the person that it’s not cool to use the word “gay” that way, and inform them that really, it’s fine, they can still be 100% straight and have a homoerotic thought or even experience every once in awhile. Really it’s totally normal and they need to get over themselves.

Answer: (d): Ending homophobia and toxic masculinity starts with you!

You can do this little buddy! I know it. 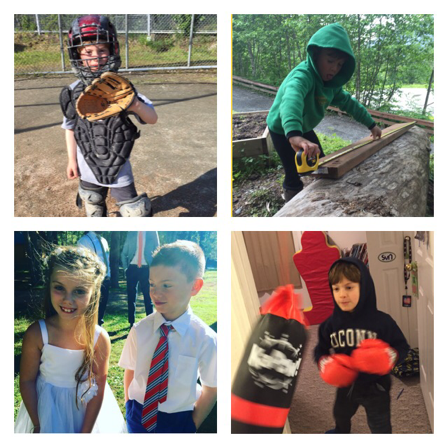