Brant is the quarterback of your high school football team. Brant is the mean rich kid in an 80's brat pack movie who throws a house party while his parents are out of town. Brant is the ne'er do-well leader of a surfer gang.

And now Brant is a Johnny Cash lookalike Rachel Dolezal-type cultural appropriating huckster mofo who's trying to get rich quick--Lyle Lanley a.k.a. monorail guy from the Simpsons style--by charging people $1,700 $1,500 a head (EARLY BIRD DISCOUNT!) to say a few magic words and eat quinoa in the woods.

You can read more than you'd ever want to know about Brant here, but from what I can tell he took a bunch of peyote in the desert 30 years ago, "captured and released a rattlesnake with his bare hands," went on a "fourteen month fruit fast," and now thinks this qualifies him to lowkey separate rich hippies from their money.

A friend texted me about Brant, his Cali-based "Dance of the Deer Foundation," and his Alaskan "Shamanic Retreat" even before the Juneau Empire article came out, but Brant should know that you don't do anything on this land, in this way, without first consulting the Native community.

Rosita Worl, president of Sealaska Heritage Institute came for Brant in a letter. From Rachel D'Oro's AP Report in the Washington Post:


The Juneau-based Sealaska Heritage Institute voiced its opposition to the pricey June retreat in a letter emailed Friday to the event sponsor, Dance of the Deer Foundation. The event — billed as the 24th in Alaska — is scheduled for June 22 to July 1 at an undisclosed lodge outside Juneau.

In the short letter, Heritage Institute president Rosita Worl calls the event “a violation of a most sacred tradition of Native peoples.” She asked that the foundation not come to the area that’s considered the ancient homeland of a Tlingit group.

Worl said the event appears to be another form of cultural appropriation.

“They are taking a cultural practice, cultural knowledge. They’re taking it away from a tribe,” she said. “Then they are transforming it into a commercial enterprise to benefit themselves.”

The Dance of the Deer Foundation later apologized for not reaching out to the Alaska Native organization. In a letter addressed to Worl, the Soquel, California-based foundation released a statement saying it holds the deepest respect for Native people, including the Huichol tribe that it is closely connected to.

M'kaaaaaayyyyyyyyyyy.
The Dancing Douche Foundation later emailed Sealaska a sorry-not-sorry which of course did not include any indication whatsoever that they wouldn’t in fact hold this BS “Shamanic retreat.”

I guess being "closely connected" to some other tribe makes it okay to commercialize ancient Alaska Native traditions by charging a bunch of tech bros with more time and money than they know what to do with to hang out at the Mendenhall Glacier visitor's center?

This is among the weakest “but my best friend is Black" attempts to get street cred with POC I've ever seen in my life!

While the worst part of this might be the appropriation of culture and the commercialization of spirituality, the best part is actually the way the "Dance of the Deer Foundation" describes the Alaska retreat.

First, as locals well know, the iconic picture that the retreat is using on its website--of the fireweed meadow in front of the Mendenhall Glacier--is taken from a parking lot on the side of the road with a lumber store and full-on highway right behind it.

Second, I’ma break this shit down for you right here and right now:

We’ve all seen the beauty of Alaskan wildlife on television and in magazines, but experiencing a personal connection with the soaring bald eagles and singing whales of this land is indescribable. Sitting in our lodge, watching the eagles fly about or floating along the inside passage with whales breaching all around you is awe inspiring. Listen to the songs of the whales echoing from the sea as you drift to sleep. Awaken to the cries of the eagle, as the dawn brings a new day.

TRANSLATION: There is nothing about what I've just said that can't also be achieved by getting on an Alaska Airlines flight to Juneau, renting a car, and driving out the road or asking a local how to take a ten minute walk to Outer Point by yourself. Also, you're just as likely to awaken to the cries of the Norwegian Pearl's fog horn as you are an eagle. BUT, if you REALLY want to awaken to the cries of the eagle, you should pitch a tent by the dump.

Join in community with like-minded people. This retreat is not only a chance to experience something unforgettable but also to share that experience with a community of like-minded individuals.

The shamanic circle is full of diverse people, young and old. Families return year after year to celebrate life together in nature.

TRANSLATION: There are actually people who pay me to do this more than once.

Spiritual practices in nature and ceremonial celebrations bring the community together, unifying the circle with all of creation.

TRANSLATION: Oh yes, unify the circle of creation, whatever the fuck that means . . .  but first I'll need a downpayment to reserve your corner of wet muskeg.

Learn how to approach sacred places of power in the traditional Huichol way. Receive the blessings and energy of various places of power through Brant’s transmission and find the answers to your prayers.

TRANSLATION: Let me gas myself up by saying a a few chants that sound quasi-legit yet have nothing to do with where I am. What's your routing number? We accept cash and all major credit cards.

The ancient practice of pilgrimage allows us to deepen our connection with nature and tap into the energy of the land.

TRANSLATION: The ancient practice of tapping into your wallet allows me to deepen my connection to several real estate investments I have in the Bay Area. 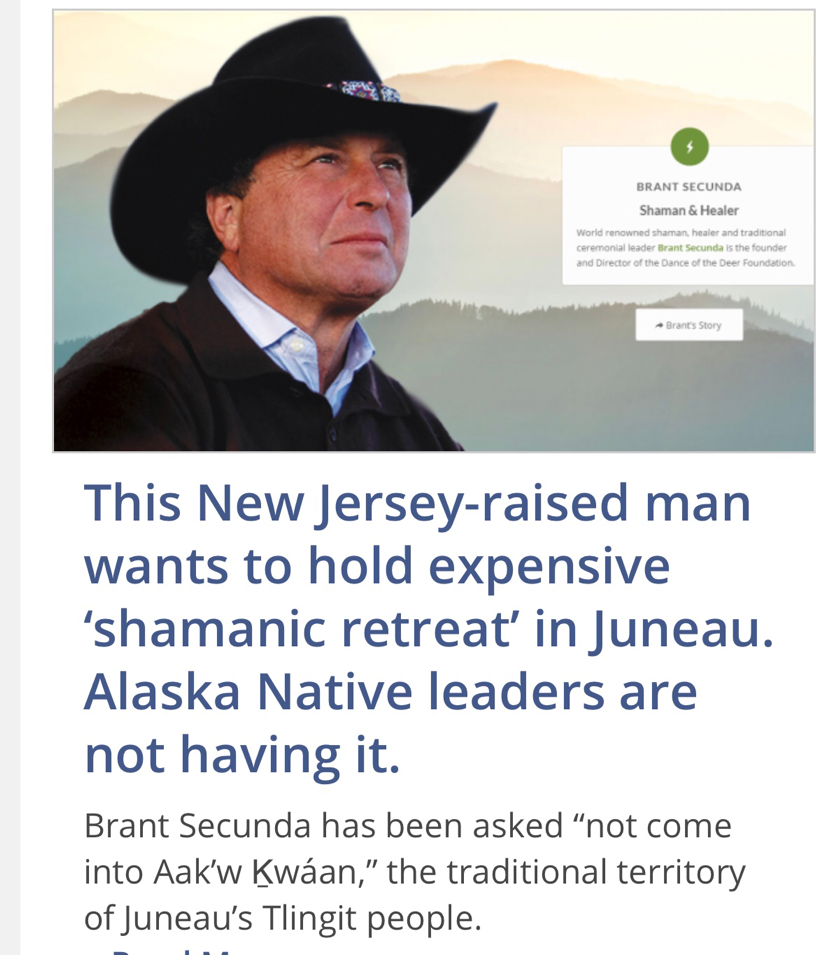