Some folks have asked for the text of my speech at the Juneau women’s march yesterday. Here it is along with a photo and a screenshot and a transcription of a letter from the man who inspired it, my grandpa.

I never met my grandfather. His name was Alexander Cournos, and he died in 1948 at the age of 56, when my mother was three years old.

But he was a criminal and a felon.

He served four years of a ten year sentence at Leavenworth, a federal prison in Kansas, from 1917 to 1921. He refused to take a plea deal from the government and contracted tuberculosis while incarcerated. His mugshot is the only photograph we have of him.

He and 30 co-defendants were prosecuted and convicted in less than two hours under the federal Espionage and Sedition Acts, for undermining the war effort and advocating industrial sabotage by organizing copper miners during World War I.

My grandfather’s letters to his mother from prison live in the Labor Archives in Detroit. In those letters, he explains his principled stance on the labor movement, and why he chose to go to jail rather than promise the government he would stop union organizing.

I have this man’s blood running through my veins, and I think of him every time I feel afraid.

Because it is not easy to stay positive, loud, and powerful when the whole world wants you to be negative, powerless, and mute. I tell myself, if my grandfather could go through all of that for what he knew was right, and for what this country subsequently recognized in law as right, then certainly I can put a little bit of skin in this game.

I can take some personal and professional risks. I can endure threats to my job, and even threats to my body, and I have, and I do. Why?

Because I am not afraid.

I have a secret to share with all of you. Fear is a petty bully. Fear is weak. And it can be conquered by two weapons that each of us has within ourselves: our time, and our voices.

How we use our time, how we use our voices, is our rebuke to fear. This is not a political statement. This is a human statement. We are living in a time that transcends politics. This is not politics, what is happening now. And you know what? That's a good thing. It’s a once-in-a lifetime opportunity to stand for human rights and the protection of our constitutional democracy. It’s a unique moment to speak up for social justice. For what’s right and wrong. These principles are being tested daily, and you are all standing here because you know it.

And guess what? You're right. We're right.

You can do this. WE can do this. We can stay positive and powerful even when it feels like the entire world—even our friends and families—are gaslighting us by telling us we are wrong and careless and irresponsible and we should shut up and go away.

And nothing—least of all fear—is going to stop us. 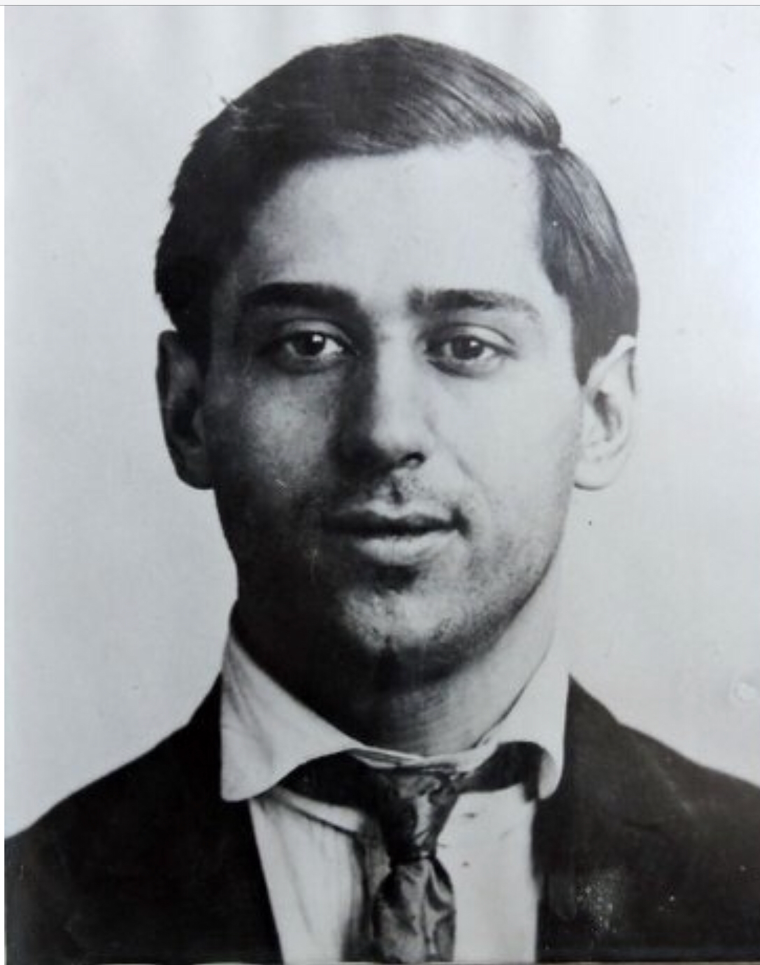 It grieves me to think that you place more confidence in the logic and statements of others, who have shown themselves indifferent or hostile to your and my interests, rather than in what I say. To take two flagrant examples:  you believe e.g. that we are each striving to be last and that we are infatuated with the place, even the tubercular patients being so infatuated with it as to prefer it to going to a better climate and being better taken care of.

Yet, after all, if one cares to stay here, it would not be hard to prolong one's stay or to come back. But, it hurts me especially to think you consider me so callous or cruel and inconsiderate of you that I prefer to stay here either for someone else's praise or because I love the place or for any of the other base, ignoble, or despicable motives that have been suggested in the past.

And these from people who, if they had stood fast, we would have been out a year ago at least, if not considerably earlier. Nor have they hesitated to spread the most horrible ideas to hinder the campaigns in our behalf and to encourage propositions that can result only in keeping us here.

To take one instance, they have said that one group was guilty of actual crime; Senator Reffer's report denies this. Now if you consider deeply the kind of character one must have to spread such a report, perhaps you will at once discredit all they may say in the future.

They, and others with them, reputed "brainy," but whose brain force is used only in intrigue, regardless of what cruelty they inflict, are quite ready to torture you through me and me through you, e.g., false reports on my health.

If at least you had some faith in what we are enduring for, it would of course make it easier for you to some extent. But they do not scruple to pervert our purpose nor to be pessimistic to you as they can.

Yet never, I repeat never, did things look so bright as they do now. Far from being determined to stay here (a statement I have never made to you or anyone else), unless it is unavoidable that it must occur, I am firmly convinced that this year, probably in several months, will see us all out.

Either an unostentatious time can be chosen or else labor day, Thanksgiving, Christmas, or New Year; for to keep on refusing release on opposing grounds is hardly confidence-inspiring, and they will sorely need all the confidence they can inspire. The election will not be along party lines but along issue lines and therefore one is not to judge by the election of a president what the people willed but rather by the congress they elect.

Undoubtedly, if not released before, this matter will be brought up before congress, for a Christmas release. I may in conclusion say that I am not taking this stand because I personally prefer my own happiness to yours, for my personal happiness would be greatest by being with you. But there are other things besides personal happiness.

If you exclude the pain I feel because of your unhappiness, I am blessed with excellent health and a nature such as cannot help but extract a good deal of happiness, no matter what the situation. This is the least matter you need worry about, my happiness. Have faith, and you will find your faith justified.

It would be a great pity if those evil men so worried you so as to make you lose out by such a short period of time. You can see for yourself, by the fact that the commitations were not fully made known till the trip was nearly accomplished, that it was thought very likely that it would not meet with general approval.

The fact that agitation has been greater in the past few weeks, than in the entire last few years, and that there is great certainty of its becoming much greater in the ensuing months. This agitation not being confined to radical papers but also being expressed in big daily articles and large two page feature articles in large newspapers, leads me to think the matter will wind up as after the civil war. 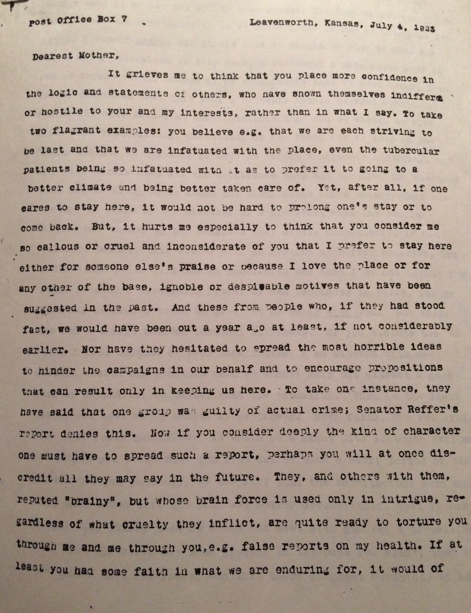 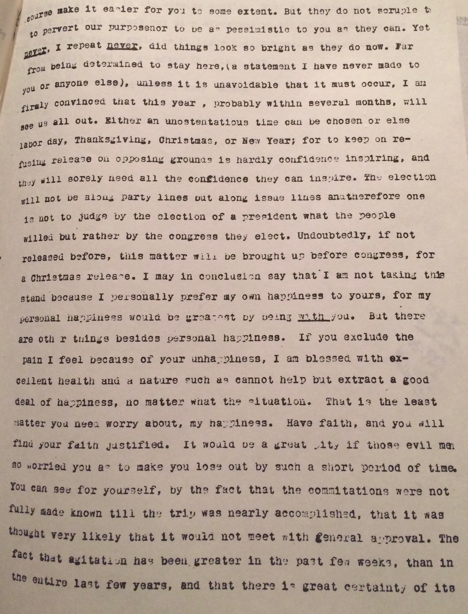