I have to admit that I kind of like makeup. Not a lot, or a lot of it. But a little. I like it a little bit. And I like to wear a little of it, mainly to work. It makes me feel like I'm ready to do battle with the forces of professional good and evil, sort of like war paint.

Women's makeup is a divisive issue: Is it capitulating to conformist gender stereotypes and deleterious paradigms of beauty? It is wrong for that reason? Does it cause cancer and other diseases?

There have been studies showing that professional women my age are taken more seriously when they wear some makeup to work. Is that a bad thing? In some ways, probably. Women of my mother's generation (my mother included) are completely unwilling to leave the house without makeup. I think that's crazy, of course. But is it any crazier than wanting to wear makeup at all? Is vilifying makeup and the women who wear it just as bad as making women feel like they have to wear makeup to be "beautiful" and taken seriously? Hard to say.

Either way, I don't judge anyone for wearing or not wearing makeup, myself included; and I don't put a lot of stock in the meaning and philosophy of makeup, or try to justify my rationalizations for wearing it to work most days. Maybe that's because putting on makeup is the most artistic and entertaining aspect of getting ready for work in the morning. My morning routine takes 20 minutes from start to finish, because I like to shower at night. (All things considered, I think I'm pretty efficient at getting ready to go to an office every day).

Still and all, there are some parts of this routine that are downright freaky. Take for example, the eyelash curler. This innocuous contraption looks anything but. In fact, one of my favorite things to do is whip around really fast and pretend to scare my kids by doing this: 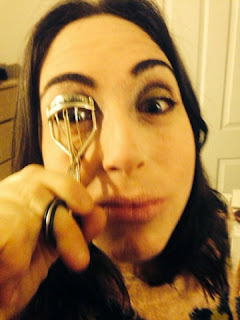 They jump up and down and squeal and we all crack up hysterically. And I tell them that when they're old enough, they can watch A Clockwork Orange, and that even if I am now setting a bad example somehow, they will recognize their mother in the below scene. At the very least--and whatever principled stand they end up taking on makeup--they will possess a working knowledge of the cult classics of British cinema. 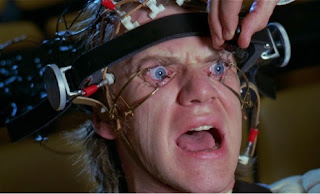