Snowflake. It’s probably one of the top three words of 2018, rolling in somewhere between woke and bananas.

According to Urban Dictionary (the Merriam Webster of Real Life) a snowflake is a “very sensitive person” who is “easily hurt or offended by the statements or actions of others.”

Now I want you to close your eyes for a minute—wait no, scratch that; keep them open so you can read—and imagine the biggest, fluffiest snowflake you can conjure up.
This snowflake fluttered down somewhere above Santa’s workshop in the North Pole. It’s bigger than the paper snowflakes your kids make at Christmas, but it’s real, crystalline, icy white snow that melts into a tiny little invisible puddle the second it hits Santa’s bushy white mustache or the tongue of Cindy Lou Who in the Grinch Who Stole Christmas.

That’s the level of snowflake I present to you in the form of Twitter user “Raven Patriot,” whose handle “cheechablunt” at first made me think this is a troll account, because it suggests its owner is a snowflake who gets baked and so maybe is actually just trying to get libtards like me all riled up.

But then I dove into Raven Patriot Stoner's TL, and regardless of whether she rips tubes while listening to the Bob Marley box set, she appears to be your standard-issue, deep-state-conspiracy theory-peddling tinfoil hat-wearing stay at home mom.
And today, she is RIPSHIT over Nickelodeon’s apparent endorsement of gun control via a 17 minute break in Paw Patrol and its impact on her three baby snowflakes, who were apparently WEEPING over this.

As a clever reader from Canada named Sarah Frey commented on the O.H.M. Facebook page, “then they came for paw patrol, and there was no one left.” I promised Sarah I would work with this, and so I shall:

First they came for Doc McStuffins, and I did
Not speak out—
Because I’m scared of amibtious Black girls.

Then they came for Sponge Bob, and I did
Not speak out—
Because the jokes went over my head.

Then they came for Clarissa Explains it All, and I did
Not speak out
Because Clarissa is a white blonde girl who Gets Me.

Then they came for Paw Patrol, and I tweeted
My outrage
And the internet dragged me harder than Dora drags Swiper for swiping.
Because why don't I have OnDemand
And then they said to me BYE, FELICIA. 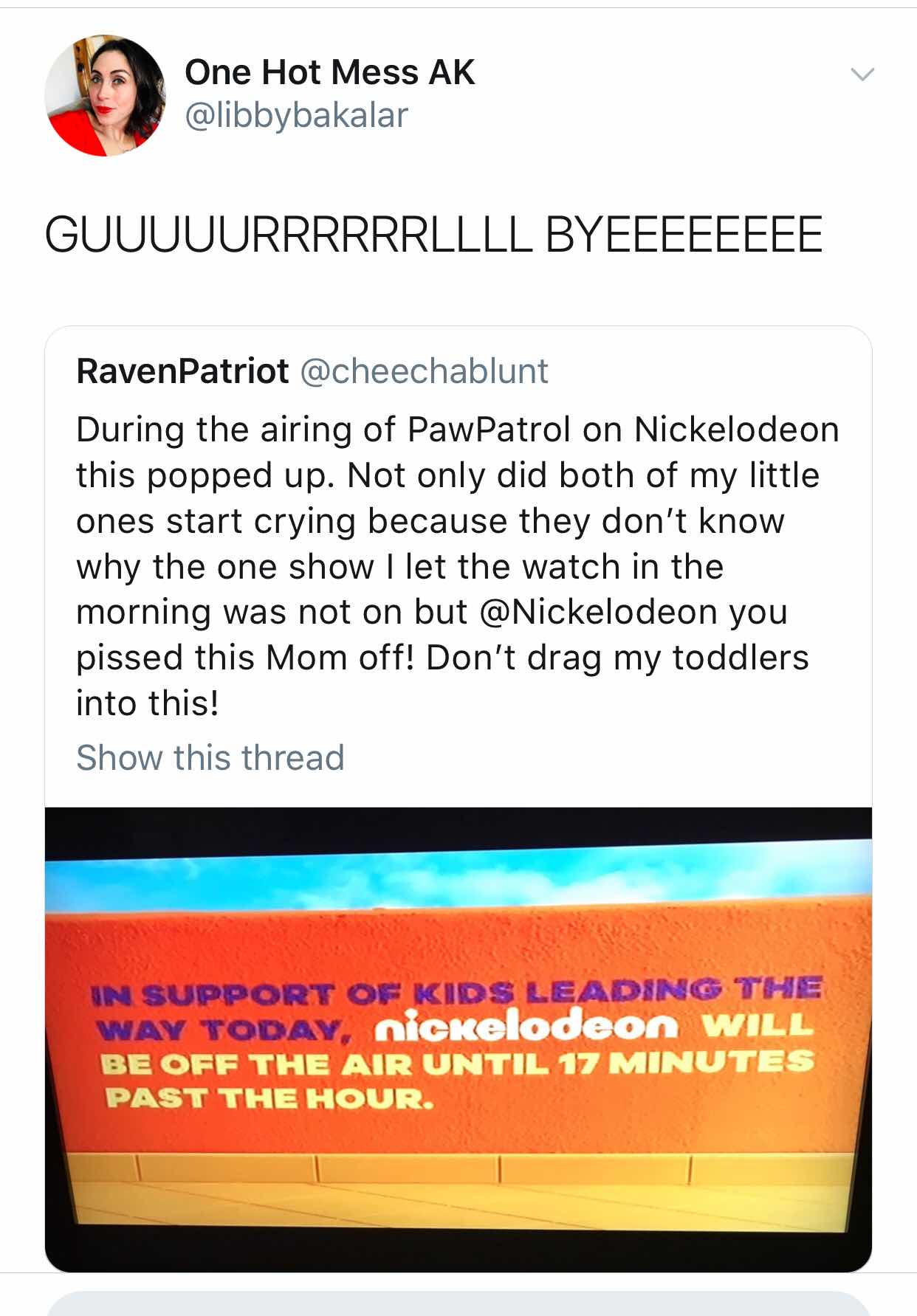