Everything I Know About the Iditarod Could Fill a Book

As you might expect, because I live in Alaska, everything I know about the Iditarod sled dog race could fill a book.

IF (and these are BIG ifs): (1) that book was exactly one page long; (2) I didn’t look up anything on the internet; and (3) I wrote the whole book straight from my head in fifteen minutes and with zero research of any kind.

Once upon a time, specifically the winter of 1920 or sometime around then (?) some kids got really sick in Nome. Actually like half the town was dying at this point from diphtheria, I think it was, or maybe pertussis? Regardless, it was definitely one of those diseases you get vaccinated for today if you’re smart, and that you’re kind of a selfish asshole who shouldn’t be sending your kids to daycare anyway if you don’t.

Whenever it was, it was before planes, trains and automobiles. The movie—SO FUNNY—starring John Candy and Steve Martin, obviously, but also the conveyances. Well, before planes, anyway. I think?

There were trains and automobiles, but the train got snowed in, and regardless it didn’t go to Nome and there were no roads to Nome (still aren’t) so they had to race the serum from Anchorage using a relay of dog teams. Siberian Huskies and some mutts, mostly.

The serum, by the way, wasn’t like face serum for wrinkles that you order from your sorority sister’s multi-level marketing scheme for $74 a bottle. It was pertussis/diphtheria serum and it was literally a race against death trying to get that shit to Nome.

The weather was REALLY bad along the Iditarod trail (not yet called the Iditarod trail, I don’t think). Like blizzards and wind and blowing hail across lakes and rivers of ice and huge expanses of horrible Shackleton-expedition-esque Arctic bullshit and it was BRUTAL.

Amid all the exposure and hardship, two dog teams in particular stood out as really doing a good job on their legs of the relay. One of them was led by Balto who is now a statue in Central Park in NYC for some reason.

Another one was led by Togo who got ROBBED because he never gets enough fucking credit. But bottom line, the serum made it to Nome and the town was saved! HOORAY! Now there is a terrible Disney movie and a few kids’ books about it.

Fast forward a few years, and someone decided to make a dog sled race on the same trail to commemorate the historic journey. Now mushers from all over the world compete in “The Last Great Race” every March. There are a handful of local mushers who do it every year and always a few randos from Scandinavia and a feel-good story about some rookie who overcame a rare disease and this is his redemption.

There’s a ceremonial start in Anchorage and the real start in Willow, but the bummer is each year the race officials have to evaluate trail conditions because climate change, and now every year it’s like “will there be enough snow? will the rivers be frozen?"

There’s also a ton of controversy, like peeps from Outside with a capital O and PETA saying dog mushing is mean and abusive and everyone who races dogs should shit twice and die. Then there’s everyone from Alaska saying this is what dogs were born to do, and what do these Outsiders know and THEY should shit twice and die, and both sides absolutely rip each other’s jugulars out every year like rabid dogs in The Comments, since Murder in The Comments is the #1 hobby of modern life.

There are some big mushing families like the Mackeys and the Seaveys, and the Kings (maybe just Jeff King, maybe more Kings). Dallas Seavey is hot and was accused of doping his dogs last year with opioids, but everyone in Alaska knows that it was a huge setup and again everyone in the Lower 48 is smearing his good hot name and accusing Dallas of some bullshit.

There are also a couple of badass women too, like Deedee Jonrowe and Libby Riddles. (LIBBYS REPRESENT).

The race is highly organized and you need to pay an entrance fee and follow a very long list of rules for exactly what equipment you need to bring for yourself and your dogs. Like you don’t even want to know how much shit is required to enter this race.

Everything is regulated from the size of the water jugs to the length of the dog chains to the number and sizes of pickaxes and type of kibble and times you need to rest and have the dogs rest and the vets and the paperwork and blah blah blah. But if you win you can get a lot of money and your picture in the paper and maybe a photo-op with Lisa Murkowski, who was in my dream last night, but that’s another story.

If you have a friend with a cabin on the Yentna or Skwentna rivers though, it’s a good excuse to get drunk and watch the dog sleds run up river because that’s pretty close to Willow still and there are a zillion cabins up there and it’s a huge party. Think Mardi Gras but with your boobs buried under a hundred layers of Goretex and fur instead of having them out, and instead of a parade there's a lot of dog sleds racing one behind the other.

If you don’t have a friend with a cabin upriver, you can just go to Anchorage for the ceremonial start or fly your ass to Nome at the end to watch the mushers come in and the whole town turns into a giant party for a week, and then we do it all again the next year. 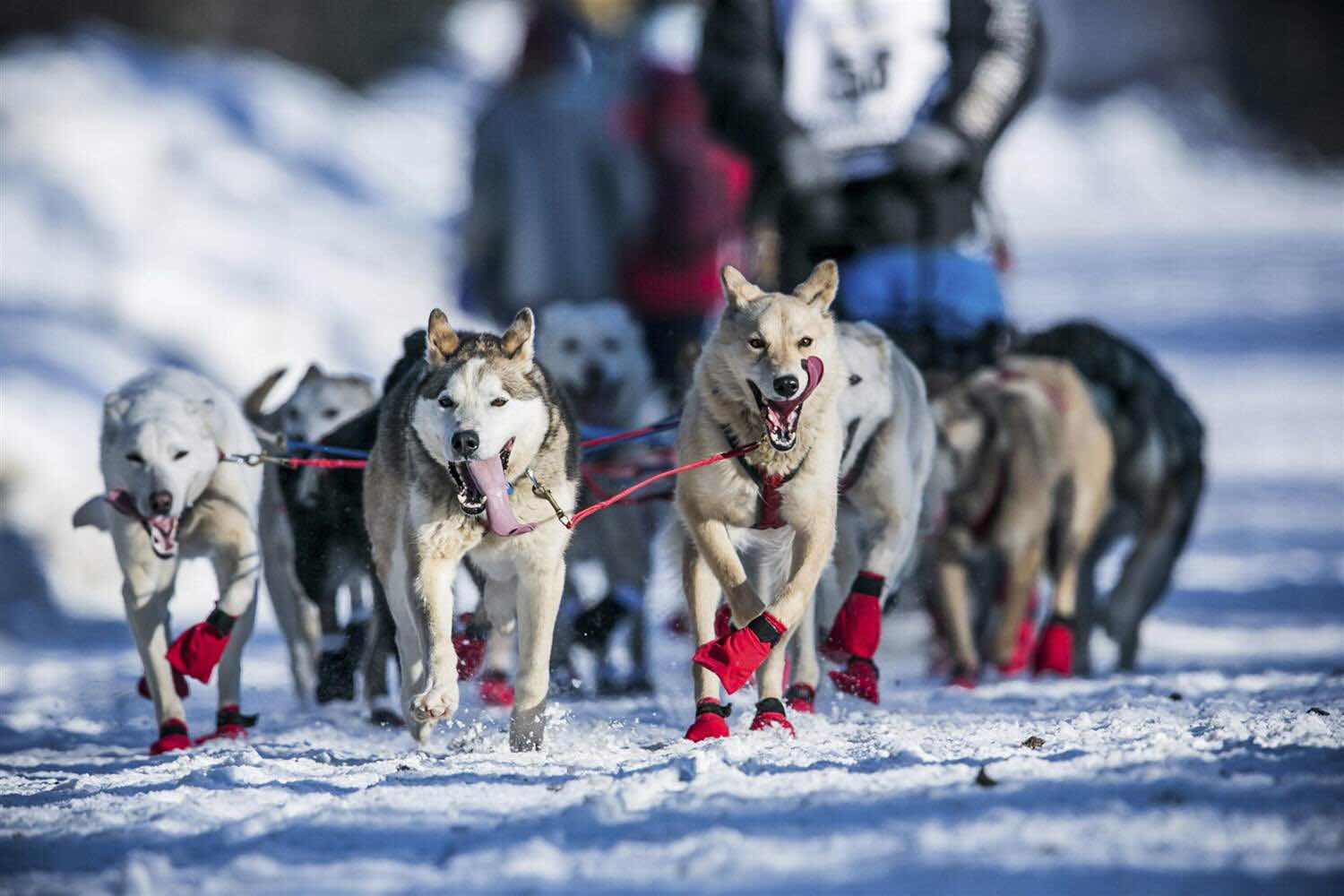