Alaska's No-See-Ums Should Go Fuck Themselves

I saw a little cloud of them on the back deck of our house this evening. Evening is when they come. When they come to FEEEEEEEEEEEEEEEED. Hollywood never made a horror movie that can compare to these little fuckers.

They are Alaska's biting midges, or No-See-Ums.

Yes, I know they have their place in the ecosystem. Yes, I acknowledge the entire planet and food chain would probably collapse without them. Yes, I realize they are probably the very last Jenga block holding biodiversity together, and if they go, well, forget the U.S. airstrikes on Syria that just happened tonight.

Current events will seem like CHILD'S PLAY next to earth without the No-See-Um. We might as well get in the panic room prepper bunker and get ready for the asteroid or the mushroom cloud if the No-See-Um goes extinct.

Okay, granted. I'm sure the No-See-Um is a critical species, but let's be honest they are also a BUNCH OF ASSHOLES and really should go fuck themselves. Like, why do they have to be such DICKS?

As their name suggests, the No-See-Um's Harry Potter invisibility cloak makes their bite that much more infuriating. At least mosquitoes are sometimes slow and often big enough to see, which means you get the satisfaction of smacking them with visible results. They also squeeze through every barrier that stops a mosquito.

To the extent you succeed in killing a No-See-Um mid-attack, you never get to see your handiwork, and he or she always has 8,000,0000,0000,0000 of its siblings following right behind to take the place of the one you just annihilated.

Bottom line, No-See-Ums can reproduce and bite you a lot faster than you can kill them.

Really, the only two things I dread about spring in Alaska are the unveiling of the dog turds and the reawakening of these midges, scientific name ceratopogonidae. I learned that last part from Wikipedia. That's also where I discovered that these flies are a major vector of disease and pests in most locations, and so are maybe not nearly as cool as I gave them credit for in the first part of this post.

I'll leave that to the entomologists, and it's a good thing I know a few. For now, I'll just say what the rest of us laypeople are thinking:

Alaska's No-See-Ums should go fuck themselves. 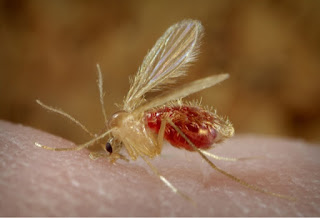