I don’t think they get it.

Or at least, no one is talking about this explicitly, though I rage-tweeted about it yesterday. But with yet another alleged victim of Justice Steff McKee’s frat-boys-will-be-frat-boys Animal House gang-rape shenanigans coming forward, it bears repeating:

This is bigger than one man, one job, or one assault. It’s about women’s boiling, justified rage.

The lost-to-treason opportunity of an over-qualified female President to a self-identified sexual assailant was one thing. That he also happens to be an incompetent, illiterate, sociopathic 80’s brat pack cartoon villain in our supposed “equal opportunity” meritocracy is another. But we’ve all marched to and fro on that, haven’t we?

And now he elevates—to one of the nine most powerful jobs in civic life—this guy. LOL! THIS GUY! We all know THIS GUY, don’t we?

It’s laughable in its banality. We can hope he’s fat, bald, and divorced by our 20th high school reunion, but no such luck.

Brett (because of course his name is Brett)—and the clinical narcissist who threw him, unprepared, on the pyre of 2018 public discourse—is every rich, dipshit jock in high school with Good Hair™ who snapped your bra, talked shit about you behind your back, sexually humiliated you while flanked by a posse of sneering, leering, jeering hangers-on, tweaked your boobs, yanked your backpack, and cheated off you in every class—all because he could.

For me, he’s the guy making obscene hand job gestures with a baseball bat during co-ed softball. Or the drunk Brown University football player who’s screaming at me during my seven-hour shift that his burger isn’t cooked to perfection. Or another one of twelve million of these dudes.

So it’s not about one Brett.

It’s about ALL the Bretts and the Biffs and the Blaines and the Treys and the Kipps and the Briggs and the Brocks and whoever the fuck else was born in post-war America to rich parents with obscene amounts of money that they stole through white collar robbery, who steam-rolled over everyone in their path to slide home like they just hit a grand slam when in fact they started between third base and the plate.

It’s about a victim of sexual assault being interrogated in a moot kangaroo show-trial by a “female assistant” lawyer, because the phalanx of old rich white dudes who want a woman's attacker installed on the Supreme Court with all due speed are too chicken shit to do it themselves.

It’s about the preposterous, staggering entitlement of suggesting that allegations of sexual assault should somehow NOT automatically disqualify you for a seat on the United States Supreme Court. As if these Congressional hearings are a criminal trial, rather than a job interview, in which your prospective employer decides to try your accuser for some reason because it’s not YOUR burden to prove you’re fit for this job. It’s a WOMAN'S burden to prove that you’re not.

Because that’s not ass-fucking-backwards. Or as Brett would call ass-fucking, "boofing?"

So there’s a cognitive dissonance here that women are rightly done with. A gaslit gulf of lies and bullshit between America’s allegedly limitless opportunities and what empirical evidence tells us is actually happening: that our bodies and minds and efforts and free will don’t mean shit.

Especially—oh yes, ESPECIALLY—if our skin is brown. Then we’re lucky if the police state manages to extricate our lifeless bodies from a ditch after we’re assaulted, murdered, and/or ejaculated upon.

It’s not lost on those of us paying attention here in Alaska that in a state currently leading the nation in DV and sexual assault--of which indigenous women bear the brunt--the lone female Senator who is still "on the fence" with this guy has the power to make history and vindicate us all.

And you’d better fucking believe we are forcing her to reckon with that. 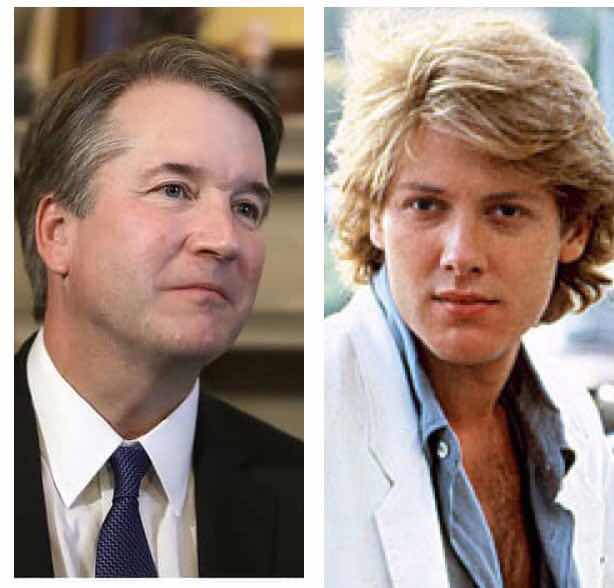