Nothing Will Ever Come of This, Because No One With Any Power Gives a Shit

Reality check: the best predictor of the future is history, and if it's one thing history teaches us, it's that women's bodies don't matter.

Maybe it's a bit cynical to say this out loud, but I also think it's realistic: the sexual assault allegation against a 17 year-old Brett Kavanaugh won't matter one iota to his Supreme Court prospects. Of course, there are 6,878 reasons not to confirm this guy to a lifetime appointment on the United States Supreme Court. But people who think this is one of them are deluding themselves.

Kavanaugh pinned [Christine Blasey Ford] to a bed on her back and groped her over her clothes, grinding his body against hers and clumsily attempting to pull off her one-piece bathing suit and the clothing she wore over it. When she tried to scream, she said, he put his hand over her mouth. “I thought he might inadvertently kill me,” said Ford, now a 51-year-old research psychologist in northern California. “He was trying to attack me and remove my clothing.”

YAWN! HUGE IF TRUE?! Not so much. First of all, it's probably NOT true. Okay, wai wai wait . . . it probably IS true, because this isn't even deviant. THIS. IS. NORMALIZED. BEHAVIOR. IN. OUR. SOCIETY.

Every single woman has experienced something along this spectrum. We have come to accept it as normal. We've taught boys to do it and girls to take it. Forget about rape and sexual assault and more obvious forms of wrongdoing to women's bodies. I don't think there is a woman alive who has not felt pressured and coerced or BEEN pressured and coerced into sex, and guess what?

NO ONE CARES. Certainly not anyone who can do anything about this.

Men by and large don't care, and most women don't either. In fact, most women shun other women for suggesting that maybe this shit is not okay, because accepting it’s not forces them to take a hard look at their own experiences.
You'll see it all over the internet: are we really going to smear a man's whole career (aka not give him a lifetime appointment to a nine person court that decides everyone’s lives) and dare to stand in the way of his blind ambition for ALLEGEDLY groping a girl and making her fear for her life when he was a drunk teen?

That's right, folks. Only we as a collective society can decide what a "big deal" is, and we have decided that women's bodies are No Big Deal.™ To the extent they matter at all, they matter only to be legislated and controlled. It's no small irony, then, that Kavanaugh is the justice most likely to at long last inflict the thousandth cut on Roe v. Wade that will herald the return of wire-hanger abortions in America.

So if you're waiting on this to matter, I'm sorry to say you'll likely be waiting forever. 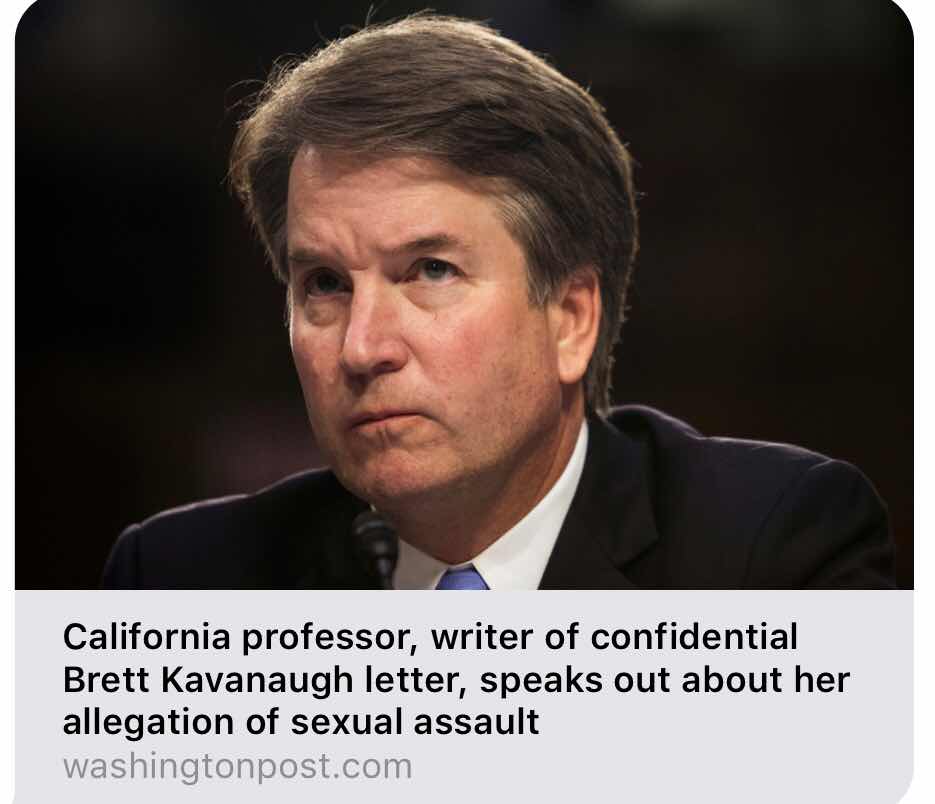