I have submitted a version of the following comment to the State in accordance with the notice and comment provisions of the Alaska Administrative Procedure Act.

To Whom it May Concern:

I am submitting the following public comment in response to the regulations project initiated by the Department of Law and noticed on Alaska's Online Public Notice System on October 1, 2019, by Deputy Attorney General Treg Taylor.
According to the public notice, the comment period is open until November 4, 2019. Also according to the notice, the proposed regulation changes are as follows:


9 AAC 52.140 is proposed to be changed to expressly clarify that the attorney general, through the Department of Law, may defend against complaints alleging a violation by the governor, lieutenant governor, or attorney general upon a public interest determination.

9 AAC 52.160 is proposed to be changed to add a new subsection addressing confidentiality.

The statutory basis for these regulations is cited as the Executive Branch Ethics Act (AS 39.52.010-960). I have reviewed the full regulations, which are available online in PDF here. However, for your convenience, the full changes are as follows:

(f) If a person brings a complaint alleging a violation under AS 39.52.110 - 39.52.190 or this chapter by the governor or the lieutenant governor, the Department of Law may provide legal representation to the governor or lieutenant governor to defend against the complaint if the attorney general makes a written determination, in the attorney general’s sole discretion, that the representation is in the public interest. (Emphasis added).

(g) If a person brings a complaint alleging a violation under AS 39.52.110 - 39.52.190 or this chapter by the attorney general, the Department of Law may provide legal representation to the attorney general to defend against the complaint if the governor makes a written determination, in the governor’s sole discretion, that the representation is in the public interest.(Emphasis added).

9 AAC 52.160 is amended by adding a new subsection to read:
(h) Notwithstanding (a) - (g) of this section, information received by the Department of Law and the attorney general related to the defense of a complaint alleged under 9 AAC 52.140(f) and (g) is confidential.

I am concerned that the adoption of these regulations will encourage corruption, malfeasance, lack of transparency, and an erosion of public trust in the Office of the Attorney General, the Department of Law, and the Governor's Office.

In enacting the Executive Branch Ethics Act, the Legislature declared that "high moral and ethical standards among public officers in the executive branch are essential to assure the trust, respect, and confidence of the people of this state" and that the purpose of the Act is to "discourage those officers from acting upon personal or financial interests in the performance of their public responsibilities."
Furthermore, "a fair and open government requires that executive branch public officers conduct the public’s business in a manner that preserves the integrity of the governmental process and avoids conflicts of interest." See AS 39.52.010(a).

The foregoing regulations are, at best, inconsistent with these statutory goals.

They permit both the Governor and his appointed Attorney General to unilaterally decide "in their sole discretion" when to expend the time and resources of public attorneys (i.e. Assistant Attorneys General) to defend themselves against any and all Ethics Act complaints. The targets of the complaints need only make written statements certifying to each other that doing so is "in the public interest." Worse yet, they can then keep all the information related to these complaints hidden from public view.

The conflict of interest and lack of transparency here should be obvious. These regulations allow the target of an Ethics Act complaint to use their own public employees to shield them from such complaints at their say-so.

The effect of these changes is that when a member of the public makes an Ethics Act complaint against the Governor, the Lieutenant Governor, or the Attorney General, these individuals can decide by executive fiat to expend public resources to defend what may be their own misconduct.

This is not a proper use of Department of Law labor.

While the Attorney General is "the legal advisor for the governor and other state officers," the enumerated statutory duties for that office make clear that this role is not intended to include using Department of Law attorneys as the personal defense team of the Governor, Lieutenant Governor, and/or the Attorney General in these individuals’ "sole discretion" and based on their subjective determination of what constitutes "the public interest," if and when faced with an Ethics Act complaint.

The Attorney General's duties include the defense of the state and federal constitutions; representing the state in civil actions; bringing and prosecuting all cases involving violation of state law; drafting legal instruments for the state; and providing legal opinions to the governor, legislature, and other state offices. See AS 44.23.020.

Nothing in these statutes suggests that Department of Law resources should be deployed to defend three specific high-level state appointees against their own potential violations of the Ethics Act with the stroke of a pen, under some meaningless and subjective rubber-stamp standard.
The Legislature, not the Attorney General or the Governor, should decide when and under what circumstances these particular high-level state employees receive Department of Law services.

While in some cases it may be appropriate for the Department of Law to defend these individuals from an Ethics Act complaint, allowing the Attorney General and the Governor to unilaterally determine in their "sole discretion" when that can occur, and when doing so is in "the public interest"—is rife with conflict.

That is because under the regulations, the same people who would make "written determinations" to gift themselves the personal legal services of state attorneys are also the targets of the complaints. The fact that the Governor and Attorney General may "cross-certify" for each other does little to resolve this obvious conflict.

The regulations also place Department of Law attorneys in the awkward position of being forced, at risk of dismissal from their jobs, to engage in representation that is potentially inconsistent with state law and/or the Alaska Bar Rules of Professional Conduct.

These regulations violate the spirit if not the letter of the Alaska Executive Branch Ethics Act. I encourage the Department of Law not to adopt them. 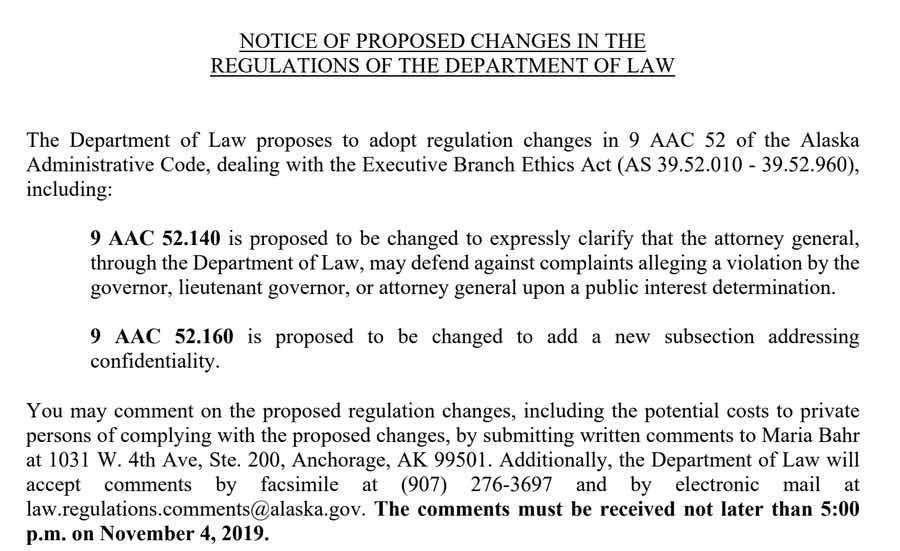