Nature, Nurture, and the Illusion of Free Will

I’ve been thinking (and therefore posting) a lot about my maternal grandfather, Alexander Cournos, this week.

I often think and write about this "Russian Jew," as one newspaper article called him, around Labor Day, because he was an early union organizer for the IWW and was imprisoned for “sedition” and "free-speaking during war time" under the Espionage and Sedition Acts.

I never met him; he died of a brain tumor in 1948 when my mom was three years old. We have information and records from the Michigan Labor Archives about his trial and imprisonment in Leavenworth, his refusal to take a plea deal, letters he wrote from prison, a single photograph (his mug shot), and some newspaper coverage.

After one of my grandpa-related posts, an O.H.M. reader found this excerpt from a 1923 (?) newspaper in which he explained to a reporter why he refused "conditioned commutation" of his sentence, which I gather was an offer to exchange his liberty for a promise not to union organize again:

Says Alexander Cournos, one of the Chicago group, under a 10-year sentence for free-speaking in war time:

I refused conditioned commutation because I believe that every act of every one of us, however insignificant, has the power for good or ill, and the power of even slight actions often reaches into the future. My acceptance of compromise would have made it just that much harder for the next man, for every other man, to live up to his principles. It seems to be unthinkable that a self-respecting man would yield his own civil rights in such a disgraceful bargain; certainly I will never help to fasten chains on my fellow men . . . no killing of men's bodies can kill the ideal they have stood for. It is only slavishness of spirit that can betray their souls.

I had never read these words before a reader alerted me to them, but I haven't stopped re-reading and thinking about them since. They made my mind start spinning around an axis of genetics, free will, nature, nurture, spirituality, purpose, suffering, and other lofty concepts as I tried to take meaning in, and distill some sort of lesson from, what he had said.

I would never dream of comparing myself to an actual political prisoner, but I do feel like a metaphorical one at times. This month, for some reason, has been especially hard for me. I cannot seem to get over the loss of my "work family," which I lost for speaking out against Trump. Each day I spend working alone, without them, I miss their insights, laughter, and wisdom. I grieve this loss daily and I feel both literally and physically alone almost all the time.

As tough as I try to act, and be, and as much as I try to ignore it, I have a hard time hearing and reading what other people are saying about me, and the names they are calling me, on their blogs, on the radio, and so on. I don't like the role I have fallen into, but I also do not feel like I am able to abandon it. It's almost like I am free-climbing on a cliff wall, trying to ascend to the top, and there's no way to get back down without summiting. I take full responsibility for putting myself on this path and I don't regret it, but I do wonder if I ever really had a choice to begin with.

Reading my grandfather's words gave me chills, mostly because I could have written those very words, and have, in a more modern way and slightly different context, nearly a century later. It made me question my long-held atheism and lack of spirituality. My mother pronounced the similarity "eerie" and my dad, a science writer, attributed it to genes.

I have my grandfather's hair, coloring, and eyes, and the Mona Lisa smile in his mug shot seems to imply a congenital defiance that my mother, his daughter, has also leaned into in her own career and activism. Believe it or not, I don't actually want to be "doing this," whatever "this" is. As I said on a recent podcast, I look forward to the day when I can comfortably return to blogging mostly about parenting and makeup as opposed to the collapse of democracy as we know it. But that day seems like a long way off at this point, and so I need to somehow gear up for the long-haul.

Realistically, we could be living under the sadistic, un-American, and compassionless Trump-Dunleavy regime until 2024 and 2026, respectively. Even just the preliminary stages in my First Amendment lawsuit against Dunleavy and Babcock--filed nearly a year ago--will be ongoing until nearly a year from now. In other words, this is a long-game and it's not a fun one. And when it's finally over, there will be little to do other than survey the wreckage it has left behind, for me and others, and to attempt to rebuild and reclaim what was lost to us as citizens and individuals.

For now I am finding strength in what my grandfather said. I am telling myself he is watching over me, even if I don't actually believe that. I am trying to heed his warning that "every act of every one of us, however insignificant, has the power for good or ill, and the power of even slight actions often reaches into the future." I am trying to view this as a calling rather than a choice, even if it's really a choice, because I'm starting to realize that the line between choices and callings are blurrier than I'd imagined.

I am thinking about what my grandfather said about civil rights (specifically and eerily, the right to free speech), about not yielding those rights in a "disgraceful bargain," and about how refusal to yield them has implications beyond oneself, how yielding them was "unthinkable" to him (and to me) and how if something is unthinkable, it is usually undoable as well.

In another of his letters, he explained to his mother, my great-grandmother, that he was not choosing to stay in prison to spite her or make her unhappy; that his "personal happiness would be greatest by being with" her. "But," he went on, "there are other things besides personal happiness."

My grandfather could not possibly have known that his only grandchild would one day, almost 100 years later, read his words from an old newspaper and find comfort and inspiration in them. But he clearly knew that the things he did, said, and wrote, "however insignificant", had the "power to reach into the future," and that there are "other things besides personal happiness." I know I would do well to remember all of that. And I try my best to do so every day.

I like to think that, somewhere, somehow, my grandfather is looking down at me with that same knowing smile. 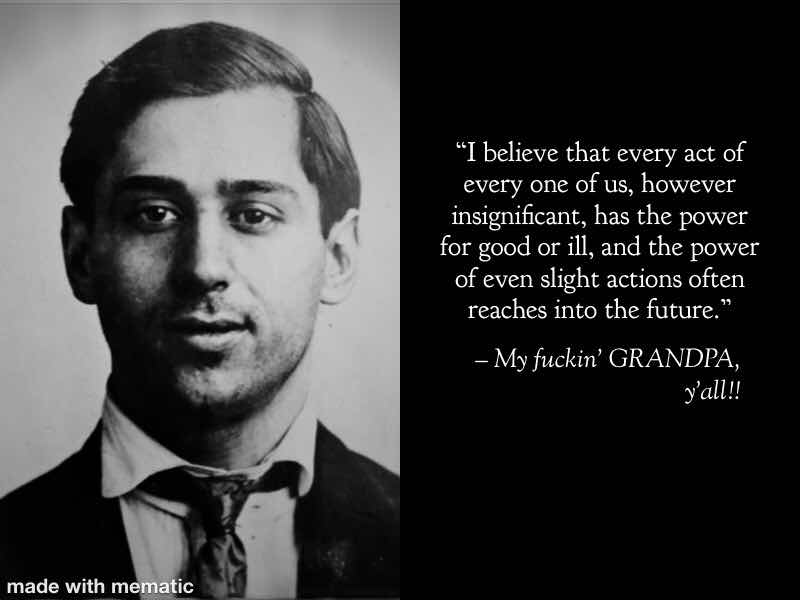