I'll be straight with you: This may come as a surprise (AHEM!!), but I don't get out much. I haven't been to a movie alone with an adult human since before Pixar. And ever since then, 99% of the movies I've seen in the theater have starred CGI muppets voiced by Jack Black or Dwayne the Rock Johnson or some shit like that.

And so it was that in this, the Year of Our Lord 2020, I watched a movie called The Invisible Man, starring that white lady from the Handmaids Tale, but without the Little Red Riding Hood cloak and giant coffee filter/veterinary cone collar bonnet thingie.

So yeah. Imagine a movie starring that lady. Imagine her in an amalgam of the Gas Light (the 1938 play from which the infamous psychological torture technique takes its name), Sleeping with the Enemy, Spider Man, Fatal Attraction, Harry Potter, American Psycho, and a 1991 ABC After School Special about healthy relationships and domestic violence.

I knew it was going to be the best-worst, because it came out in March, which is the notorious post-Oscarish time of year that studios release their biggest duds. And the Invisible Man did not disappoint in that department.
Start with the title. Someone was def mailing it in for that one. Like, oh, let’s make this movie about a man who stalks a woman while invisible and call it ... wait for it ... INVISIBLE MAN. All the side eye to that ALONE!

Here's what I remember. (Keep in mind, I don't remember much, because I had my feet up on a heated recliner seat that doesn't exist in Juneau. Frankly, these seats came from Mars as far as I and my fellow traveling skate mom were concerned, since Juneau just graduated from folding chairs and, as I said, I don't get out much).

Anyhoo, Elizabeth Moss plays the abused girlfriend of a tech bro douche billionaire named Adrian Griffin. Because of course that's his name. That WOULD be the name of a genetically-modified organism bred to look like a hybrid of Jake Gyllenhaal (who side bar, I legit went to summer camp with for three years in the '80s, true story), Adam Levine from Maroon Five, and a pangolin.
In short; boyfriend has good hair, five days of stubble, the personality of a Portobello mushroom burger, and the empathy of a Great White shark.

So anyway, Adrian Griffin is a computer engineering genius who made an invisibility cloak out of a million tiny cameras in his fancy basement somehow. This becomes an important detail, as we come to learn that Adrian Griffin met his very boring girlfriend at "a party" and honed in on her as the best prospect to lure and imprison in his sprawling, minimalist compound overlooking the ocean in the San Francisco Bay.

It is now we learn that Elizabeth (I'm calling her that because I forgot her character's name and am too lazy to Google it) has plotted an elaborate escape from the estate in which--again for reasons unknown--she does a Mission Impossible where she drugs Adrian, tiptoes out of bed in her lingerie, disarms 18 different alarm systems, grabs a bug-out bag she's been hiding in a secret ceiling panel, changes into a Cal Poly hoodie so we know she’s no bimbo, hurls herself over a ten foot cement wall, and jumps into her sister's Audi.
All when it was apparent she could have just walked out the front door all along. But then the movie would have ended after 13 minutes, and it didn't. It went on for about 117 more.

Well, needless to say Adrian is sad to lose Elizabeth, and so he does what any other jilted lover would: he fakes his own death with the help of his younger brother slash trust attorney, leaves her a large inheritance, dons a high-tech invisibility cloak, and proceeds to gaslight the ever-loving shit out of Elizabeth for months on end.

In the interim, Elizabeth moves in (asexually?) with a hot single dad Black detective and his daughter, who seems to be her niece, but is maybe just a family friend? It's unclear. And basically, Adrian follows Elizabeth around in his cloak and does poltergeist shit like break dishes and step on sheets and also more hardcore stuff like sabotage her job interviews with other misogynists, send emails from her email account, and frame her for slitting her sister's throat at a hipster sushi bar.

By this time, I have about a gallon of Diet Coke threatening to rupture my bladder, but I gotta see how this ends. SWEET VINDICATION!! After driving Elizabeth into a secure psychiatric facility, Adrian finally takes his tech one step too far and tries to take out her entire medical and corrections team in a firing squad. This causes various substances to get into the hardware of his camera suit, and he starts short-circuiting and FINALLY THEY BELIEVE HER!
You can probably tell by now that this movie has more loose ends than a thread factory.

Adrian finds out that Elizabeth is pregnant with his baby, even though she was supposedly on birth control, and here's where we get to the After School Special part. Elizabeth rattles off an entire checklist for Domestic Violence 101. This would be laudable, but these awkwardly-placed “red flag lessons” are lost amid the sheer ridonkulosity of a movie that ends--SPOILER ALERT--with Elizabeth giving Adrian a taste of his own medicine.
How? Well, by stashing an invisibility cloak in a different ceiling panel, going to his house, getting it, putting it on, and murdering him during dinner to make it look like a suicide.

I mean, the end. Just THE END. 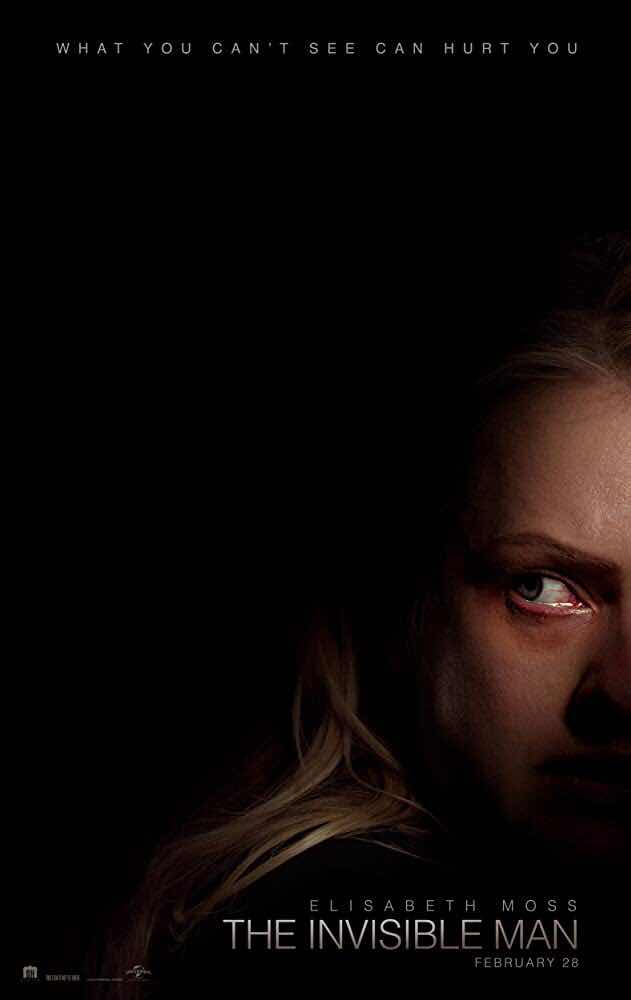