Metaphorically and generally speaking, you could drive a tractor trailer between a child and an adult's respective levels of enthusiasm for a traveling carnival.

We were in the car, en route to the carnival that had set up shop for the month on a vast stretch of asphalt parking lot abutting one of Juneau's two quasi-abandoned 1970's shopping malls.

The kids were literally bouncing up and down with excitement in the backseat, and it was blazing hot outside. If I hadn't spent the morning walking in nature with a good friend, I would definitely have leapt from the moving vehicle to escape my fate.

I felt my breakfast repeat on me a little as I watched a half-dozen rickety metal rides hurling people around in circles and spied--out of the corner of my eye--a piece of dog/possibly human shit with a cigarette buried in it.

At that moment, a large-ish man ambled past wearing a red T-shirt with white lettering that read: "I'm not a gynecologist, but I'll take a look." I felt a flashing surge of relief that one of my kids can't read yet and the other can't read well or fast enough to have asked me to interpret that particular sartorial choice.

We were immediately divested of $40, which lasted for four rides. Then we paid another $40 for a couple of plastic shell games and two ice cream cones. "Bend over and grab 'em," Geoff mumbled as he dispensed bill after bill in service of "making memories" for our kids.

The people operating the rides had a look about them. A look familiar to anyone who has been to a traveling carnival. A look that says silently (often between very few teeth): "You would be wise not to put your child's life in my hands."

So it was against my better judgment that I let my kids go on something called "The Himalaya" and something else called "The Tornado," which at least Isaac was probably too short to ride. (Needless to say, the enforcement was lax).

I also went on one of the rides, but it was a boring spinning plastic apple that somehow still made me want to vomit. The guy running it seemed especially frightening in his apparent ineptitude, but the thing was close enough to the ground and moved slowly enough that I felt I could take able command of the apple in an emergency.

On our way out, I ran into another mother I know. She had her three children and her husband in tow. We locked eyes and didn't have to say a single word. "I know," I said, touching her sympathetically on the shoulder and handing her three stray ride tickets that were insufficient to get our kids on one last ride. "I'm going to write 'The Carnival Enthusiasm Gap' as soon as I get home." 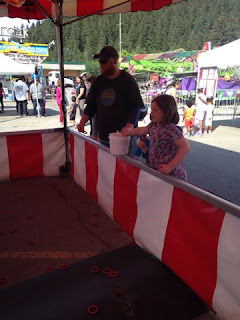 Geoff and the kids getting shellacked at the bottle ring toss.