Well This is Awkward

Well, this is awkward.
My former employer--Dunleavy's scandal-plagued Alaska Department of Law--made international news this morning when an Assistant Attorney General in the Civil Division, Matthias Cicotte, was outed as a secret member of a far-right Mormon white nationalist group who was tweeting homophobic, anti-Semitic, misogynistic, violent hate speech under a pseudonym.
I worked a little bit with Matthias. Part of being a woman, or Jewish, or a person of color, or indigenous, or trans, or gay, is working with cis-het white men whom you know or suspect or must assume secretly hold these kinds of views, but are polite to your face. It's chilling, but some of us just live with that reality.
In any event, my notifications instantly blew up with comparisons between this situation and my case against the State. I have some complicated thoughts on this that I can only process in writing.
Here are the similarities based on what we know so far. I was active on social media on my personal time, and so was Matthias. Let's assume for the sake of argument that, like me, this lawyer's performance at work was basically perfect, and that this can be documented. That's pretty much where the similarities end.
Here are the differences.
I never blogged or wrote under a pseudonym. My employer was well aware of my blog and social media presence, all of which was done publicly and under my own name. Indeed, the State paid an outside attorney, former Anchorage mayoral candidate Bill Evans, $10,000 to conduct an investigation into my blog at the behest of MatSu Valley white supremacists. Mr. Evans' investigation "cleared" me of any wrongdoing, and I continued to speak out.
The substance of my speech was coarse and irreverent, and after 2016, geared largely toward criticizing Donald Trump. I was very careful never to blog about state matters or work, or to promote violence or bigotry of any kind. I routinely deleted any comments from my threads suggesting any. I stand behind every word I’ve ever written on the Internet, and have never scrubbed my content.
There is also the false equivalency between political speech and hate speech, and that false equivalency is rooted in power and privilege. As a Jewish American lawyer concerned with the rise of white supremacy and the erosion of democratic norms, I made statements under my own name decrying the state of our constitutional democracy and creeping white nationalism. I am a lawyer who swore an oath to uphold the constitution, and I felt that what was happening under Trump (and Dunleavy) was incompatible with that oath. I felt obliged to use my platform to speak in opposition to it.
Now, keep in mind that a white male Christian lawyer has power and privilege. That's why there's no such thing as "reverse racism" or "reverse sexism." When one group has power and privilege, and uses that power and privilege to oppress and marginalize others, it is a false equivalency to say that protest speech from marginalized and oppressed persons is the same as the ongoing assertion of power and privilege through hate speech.
That's called gaslighting.
Arguably, an avowed white supremacist shouldn't be in the business of serving a diverse public through the legal profession, but it's hard for the government to draw these lines. The idea of the government monitoring the personal social media of its employees is instinctively offensive to me as a lawyer and student of American constitutional democracy.
But that is the unfortunate corner this administration has painted itself into. His boss having fired two high-performing Jewish women AAG's for their anti-Trump speech, the current Mormon Attorney General may have no choice but to do the same to a subordinate who has been secretly promoting far-right Mormon fundamentalist white supremacist misogyny on his free time.
It's a tough question, and every fact matters. But generally speaking, I don't think the government should be policing private speech or taking personnel action against its employees for their personal use of social media.
This is one to watch for sure. 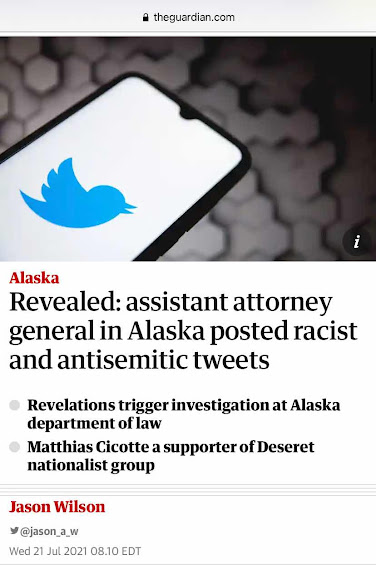