How Was This Normal?!

Ever since Trump was elected, I’ve had to ask myself almost every day whether “this” (whatever “this” happens to be that day is “normal”). For example:

I guess so. I guess that’s what they call The New Normal™️ But say what you will about the new normal, the "old normal" was just as bad. Take the game "hangman" for example, the children's spelling game. Now it's "draw the cat" or something, but when I was a kid I didn't think twice about using a stick figure drawing of a public hanging to learn how to spell.

Remember this game? Here are the instructions, still available online.


One player chooses a secret word and the others try to guess it. Whenever the players guess a letter that is not in the secret word they get a strike that brings them closer to losing. To show this, the host draws a simple stick figure of a man being hung, adding a new part to the drawing with every wrong answer . . . The classic order is:

"ONCE YOU DRAW THE NOOSE THE PLAYERS HAVE LOST THE GAME," YOU GUYS. Like this game was TOTALLY FUCKING NORMAL WHEN I WAS A KID. HOW IS THAT EVEN POSSIBLE?!?! Like a children's game about capital punishment was considered HO HUM?! I'm pretty sure I had a pack of candy gum cigarettes that I chain-smoked whenever I won a game of hangman.

Man, those were the days. 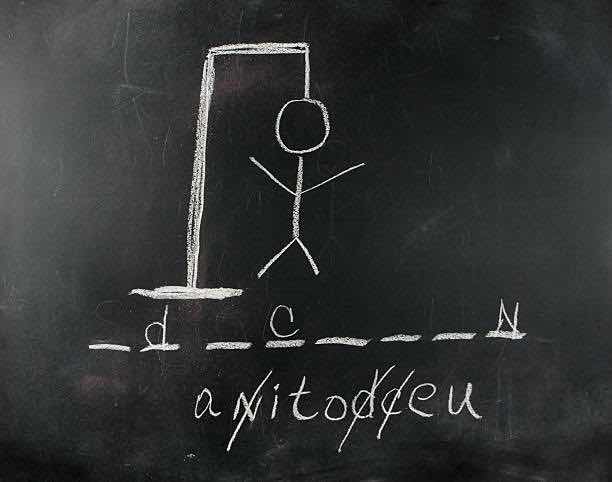