We live in disorienting times. And perhaps no picture better embodies my total confusion and sense of displacement in the universe than this tweet from Callista Gingrich, wife of congressional nincompoop Newt Gingrich, where she's sort of pretending to eat spaghetti in Rome. I legit have like, AAAAALLLLLLL the questions about this.


1. Why is the waiter photo-shopped in?

2. Why is Callista photo-shopped in?

3. Why is Callista named Callista?

4. Why is the waiter only wearing one glove?

5. If one glove is needed for a given task, why not two?

6. Why is the bowl the bottom half of a flattened coconut?

7. Why is the waiter pretending to feed Callista like she’s a toddler and they’re playing that “here comes the choo-choo train going into the tunnel" game?

9. Why is her hair Lego character hair that you clip on to a plastic Lego girl head?

10. Did Newt take this picture?

11. Why is Newt named after a primordial-ooze-originating amphibian? (Never mind, that one's self-explanatory).

12. What number wife is Callista, again?

13. Does he plan to divorce her as she’s dying of cancer like the last one?

14. Why does the waiter look so excited?

16. Why is a single forkful of spaghetti literally the size of Callsita’s head?

17. Did she actually eat that after this pic was taken?

18. Where are the waiter’s sideburns?

20. Is there even one thing that is remotely normal about this pic? 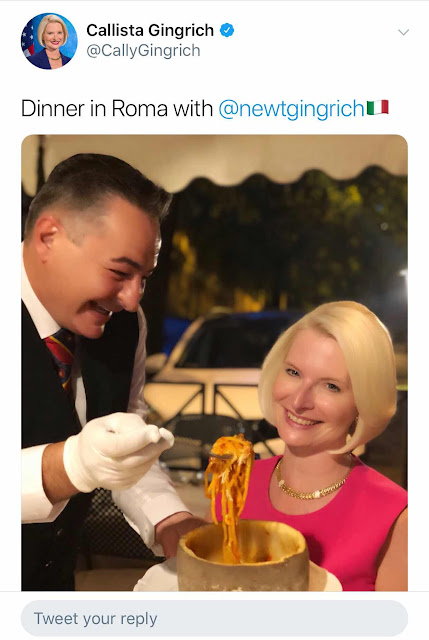