Squiggles 2 is a Survivor!

What does that have to do with Squiggles 2 the frog, you might be wondering? Well, wonder no more—I’m about to tell you.

We don’t have “real” pets for three reasons:
And so it was that we settled long ago—on Isaac’s fifth birthday, to be exact—upon mail-order tadpoles as the perfect pet.

Grow-a-Frog will send you tadpoles of indeterminate species and origin in a bag (not even PetCo sells tadpoles—they just give them away for free if they show up with other creatures). Some were dead on arrival, and some were hearty survivors.

Squiggles 2 was in the latter category, and best of all, he doesn't shit. Well maybe he does, but I don't know it, and that's the point.

Squiggles 2, as Isaac named him, has been squiggling around in his habitat for going on three years now. He’s endured the benign neglect of a poor filtration system and the indignity of a giant finger tapping on his tank, periodically, to check for signs of life.

But not until yesterday evening was his amphibious mettle truly tested.

It started out as an ordinary bi-monthly tank cleaning. This task is Geoff and Isaac’s joint responsibility, as I made quite clear when we ordered Squiggles that I would not be held responsible for his well-being.

Geoff put Squiggles 2 in a ceramic cereal bowl of water, as usual, while he cleaned out the habitat. Isaac was shellacking me at Uno on the living room floor, when all of a sudden I heard Geoff cry out:

He (or she?) was not in his bowl on the kitchen island where he’d been temporarily stationed during his routine cleaning! Apparently, he’d outgrown this vessel, and not knowing that the world was an even crueler place than his underwater plastic catacombs, leaped out impetuously.

Isaac immediately began to howl in grief-stricken agony as Geoff and I launched a panicked search for our charge. Geoff carefully studied the wet trail of slime and water, and within moments, Squiggles 2 was located inside the folds of a paper airplane and deposited back into his home. Relief was short-lived, however, because an odd white film was oozing from Squiggles 2's back.

“Google 'my frog has a weird white film coming off it,'" I demanded of Geoff. “DO IT NOW!”

Google yielded a partial answer: the oozy white film was perhaps a routine molting of frog-skin, but I wasn’t convinced, especially because we were missing critical information, such as Squiggles 2’s actual species of frog.

Imagine my surprise and relief this morning, when we went to peek in on Squiggles 2. The white oozy film was gone, and he responded with as much vim and vigor as ever to my index finger flicking the plastic shell of his home.

No matter what happens from now on, one thing is clear: Squiggles 2 is a survivor. 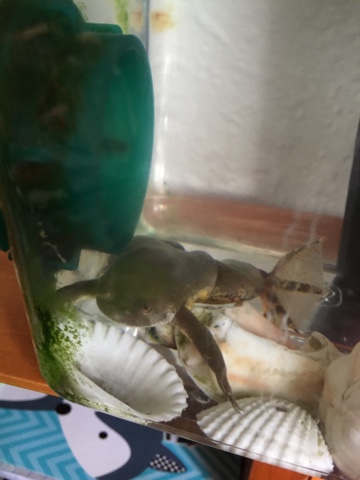