Please Allow Me to Narrate This Cauliflower Grilled Cheese Video

One of my favorite things on the internet are those food videos where a recipe that takes 10 hours to make in real life zips by in 30 seconds of fast-forwarding. For example, the unicorn cookies that poop sprinkles, which I exposed previously as a total fucking con.

Now I'm about to do the same with this recipe for grilled cheese made with mushed-up cauliflower instead of bread for some reason. The video recipe can be found here, but let me save you some time by breaking it down into these easy steps:

1. Dust off your Cuisinart and pulverize a giant head of cauliflower because "bread is overrated." Yeah. Like Meryl Streep is "overrated" according to POTUS. As someone who's had the misfortune of following a gluten free diet for the past 8 years, I can tell you for a FACT that bread is actually highly underrated. Also--and unlike an entire head of ground cauliflower--it won't give you explosive diarrhea.

2. Crack three eggs and mix them into a bowl with the cauliflower, along with Parmesan cheese, salt and Italian seasoning.

3. Take a minute to look into this bowl of oatmeal-colored mush with the consistency of dry wall spackle and acknowledge that you could already be eating a perfectly serviceable grilled cheese by now if you'd just used two pieces of bread instead.

4. Take an ice cream scooper, which for some reason you are now using to scoop cauliflower mush instead of ice cream, dump two scoops of the mixture into a pan with olive oil, and "shape [them] into toast."

5. Look at the two scoops of "toast," take stock of what you're doing, and tell yourself to get your fucking life right. You are using an ice cream scooper to shape two balls of cauliflower-raw egg goop into pretend toast. Ask yourself what led you to this place.

6. Get one banana. Contemplate ending this project, going into your garage, shoving the banana in your tailpipe, turning your car on, and sitting in your car until you fall asleep forever.

7. Decide against #6, and cook the two pieces of "toast" for five minutes per side. During these ten minutes, stare into the pan and pray it ignites a structure fire that forces you to start your entire life over again from scratch, because again, how did you get here?

8. Sprinkle grated white cheddar cheese on top of the cauliflower and tell yourself once again that this is a huge mistake. There is no reason to defile grated cheddar cheese by sprinkling it on two piles of future farts instead of on greasy tortilla chips to make nachos.

9. Pull apart the so-called grilled cheese and watch as it completely disintegrates into your bare hands and creates a disgusting, greasy, inedible pile of soggy, limp fried cauliflower and cheese.

10. Run your hands through your hair and all over your face. Look in the mirror and tell your reflection that you deserve to have your entire head covered in cauliflower and cheese grease for making this recipe.

11. Sit on the toilet and cry until tomorrow.
That's exactly what I plan to do when I make this for dinner tonight. 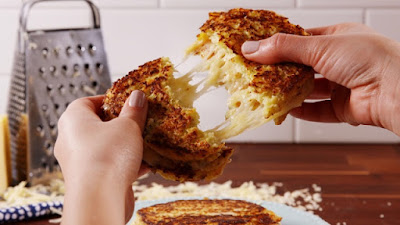 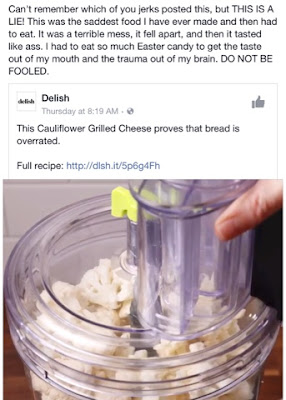