I knew I’d hit a new low in parenting when I tried to convince my kids that we should stay home and watch cartoons instead of going on a previously planned tide-pooling excursion in nature last weekend.

That Saturday evening, another mom and I made a wholesome plan for some good clean fun: we would take our kids to the beach to catch the 8:00 a.m. “minus tide,” a very low tide that periodically reveals diverse sea life and land features not usually visible in regular low tide.

But Sunday morning delivered 36 degrees and torrential rain, along with a text from my friend—a born and raised Juneau girl—that asked hopefully, “How much rain do you think is too much?” You tell me, I thought, and please God, let this be it.

We texted back and forth for awhile, each of us afraid to admit to the other that we simply couldn’t deal. We wanted to bail. We wanted to go back to sleep and park our kids in front of the television, where mine had already been stationed since 6:00 a.m.

I presented the amended plan to Paige, positive that she would be thrilled to continue watching “Monster High” all morning long. To my surprise, she objected, although in retrospect, I should have guessed that she would: For every time I want to do something, Paige lobbies for the exact opposite, even if it’s her favorite thing in the whole wide world: gluing herself to the couch for that coveted and fetishized ritual known as weekend morning screen time.

“NOOOOO!!!,” she protested, and began to whimper that it would be "forever" (also known as a month or two) until another minus tide; that she had been looking forward to this for her "entire life” (also known as the 16 hours since she heard about it); and that it was "barely even raining at all" (also known as pouring). I was informed by text that my friend's older daughter had the same reaction.

Fortunately, Isaac was on my side and wanted to stay home. I told Paige that if she could get her brother and herself all geared up in 20 minutes, we could go. I felt like the evil sea witch Ursula in "The Little Mermaid," setting out an impossible task that I knew would culminate in me getting my way.

But I grossly underestimated Paige's firm resolve to see that I didn't.


Both kids were ready in record time, and before I knew it, I was piloting our car northward with one hand on the steering wheel, the other on a giant mug of coffee, and my sphincter valiantly fighting to contain a crap that was turtling out of my asshole due to the rush that somehow wound up prioritizing marine observation over my treasured, leisurely weekend morning shit session with The New Yorker.

I must say it was worth it, even the suppressed crap part.

Well, at least it was worth it after the rain went from sideways to just regular, and once I got over the nagging neuroses that we were going to get stuck on an island across the channel and have to wade back to shore, neck-deep in 33 degree seawater before drowning 50 feet from the beach.

There were sea stars, urchins, anemones, and all sorts of other creatures that I could now view on relatively dry land in their natural habitat, rather than while diving in the ocean, which as readers of this blog well know, is an activity that is more than welcome to go fuck itself.

We ran into several other families, including one of my friends who is a real life marine biologist and once hosted a seal release party (not to celebrate the dropping of Seal's new album, but to literally release a rescued seal back into the wild). My kids were enthralled and super psyched, and I was psyched that they were getting to experience nature "in their own backyard" before the whole planet is so polluted that the only things you find in tide pools anymore are used condoms and empty bags of Cool Ranch Doritos.

Not one to miss an opportunity for familial one upsmanship, Paige gloated to both me and Isaac that she told us this would be fun. Three hours later, I was back home taking a nap while my kids finally watched the cartoons they had so wisely delayed to catch the minus tide.

Isaac inspecting what my marine biologist friend dubbed "a voracious predator." I forget what this thing is actually called. Note the boots on the wrong feet. 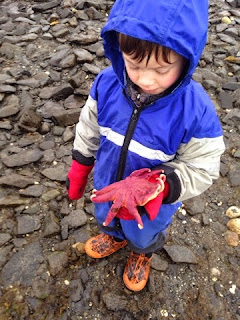 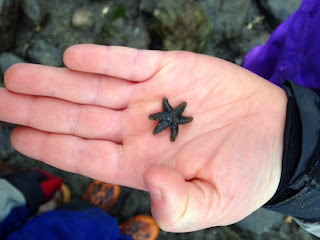 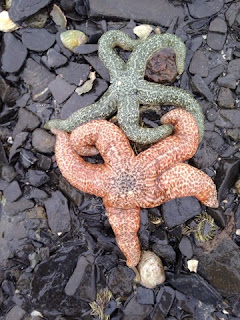 Sea star and my boots, for scale. 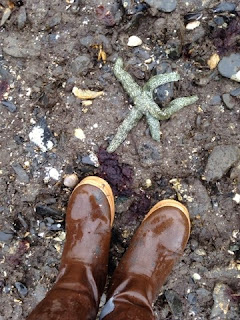 On the tidal flats. 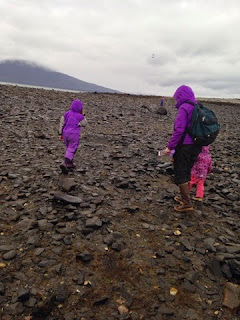 Baby voracious predator and sea anemone with recessed tentacles. I'm lying. I'm not even sure this type of sea anemone has tentacles. 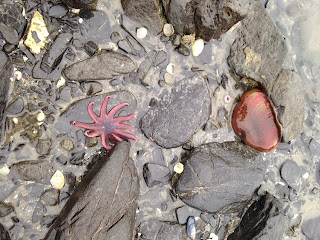 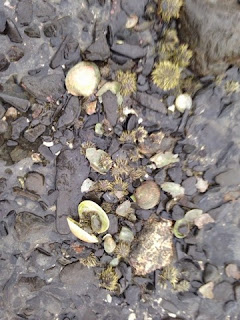